Anytime I see a toy that I think my son will like, I feel the need to buy it immediately. I often have the intention to save it for a birthday or tuck it away for Christmas but by the time I get it home I get so excited that I just start putting it together. I have a problem. Now that Christmas is just around the corner, I’m having a difficult time deciding what to buy my son and what suggestions I can give family & friends that are asking for gift ideas. I’ve been browsing online to find some gift ideas for toddlers. He’s two and a half years old, he loves anything with wheels, he likes to play independently and he loves Fisher-Price Little People. On Christmas morning, Santa always leaves him one larger present set up and ready to play with along with some treats in a stocking. This leaves my husband and I (let’s be honest – it’s always me) to brainstorm ideas for 2-3 smaller presents to wrap under the tree.

As a Fisher-Price Play Ambassador this year, we’ve had the privilege of testing out some pretty spectacular toys. There were the new Little People that my son still carries around every day,  the Laugh & Learn Crawl Around Car that I thought he’d be too old for but then I couldn’t get him out of, the Thomas & Friends sets that showed me that my grandpa’s love of trains still runs in the family, the pink Minnie Polka Dot Jet that he thinks goes along with his absolute favourite pink Fisher-Price bus, the Power Wheels Harley-Davidson Rocker that proved that this little toddler has a wild side and more!

This month we were given the opportunity to try out two of the hottest toys of the season – the Harley-Davidson Motorcycles Tough Trike and the Little People Disney Princess Klip Klop Stable.

My son has always preferred to play independently. He loves cuddles and he hands out kisses to anyone who gets close to his face but when it comes to playing with toys he prefers to play alone. When the Little People Disney Princess Klip Klop Stable arrived, I set it up for him, showed him how it works and then sat back to watch him play. Then something special happened…he came over and grabbed my hand because he wanted me to play with him! This is much better than the hand slap and “step-away-from-the-toy” stares that I usually get when I sit down to play with him. He handed me a princess on a horse as he grabbed some other friends (Thomas the Tank Engine and some Little People) to come to play as well. We had fun racing the horses down the ramps, listening to them “klip klop” all the way down and listening to the music as the horses danced on the spinning platform. He likes to experiment with his toys and put different pieces together so Thomas had a few runs down the ramp, the Little People danced on the music stage and Mike the Knight’s Galahad stopped by to meet the new horses. It was quite the party! Ever since that day, he has been grabbing my hand all the time to invite me to play with him and to read books to him…without him running away on me! I feel like we’ve reached a new milestone. Although he still isn’t talking a lot, I can see him learning new skills and turning more into a “big boy”. {Insert mommy sniffles here} 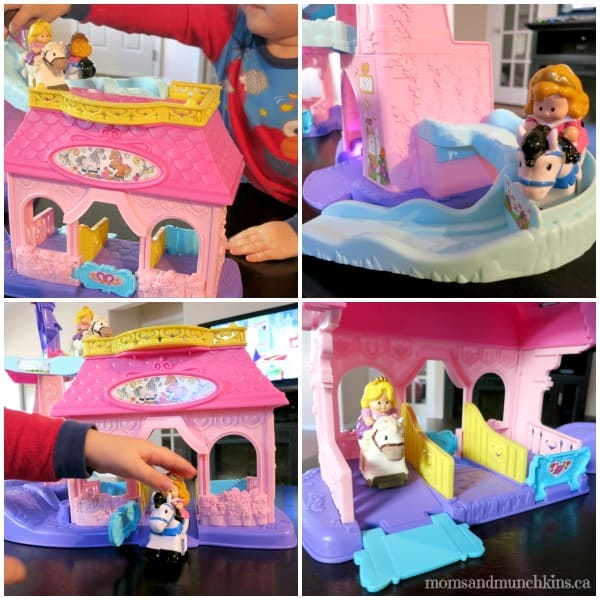 Our son is a very gentle little boy. When I take him out to play with other kids his age, he shares his toys and doesn’t get upset when another child takes something away from him. He quietly plays alone and doesn’t let too much upset him. He does have a wild side though – a side that likes to climb on top of kitchen counters (this is why all of our kitchen chairs are now locked in a separate room), he runs everywhere he needs to go and when we go shopping he has to be strapped into a cart or a stroller or I’ll never catch up to him. It’s this wild side in him that I knew would love the Harley-Davidson Motorcycles Tough Trike. My poor little guy fell a few weeks ago and fractured his leg in three different areas. His left leg was put in a cast so I thought we’d spend a lot of time on the floor playing in one area. Boy, was I wrong! Once he was home from the hospital, he was back into running and he wanted to hop right on his motorcycle even if he couldn’t pedal it yet. Come to think of it, we should have drawn little flames or tattoos on his cast to help him look more like a tough motorcycle driver. Even with a cast on, he pushed himself around the floor on his trike while carefully avoiding the stairs. He loves the seat that lifts up for storage so that he can bring along some of his Little People friends for a ride. He would sit at the back patio for a while and I could see that he was hoping he could take it outside but it was way too chilly for that. This toy is going to be a big hit this spring when he can take it outside and pedal it to the park. 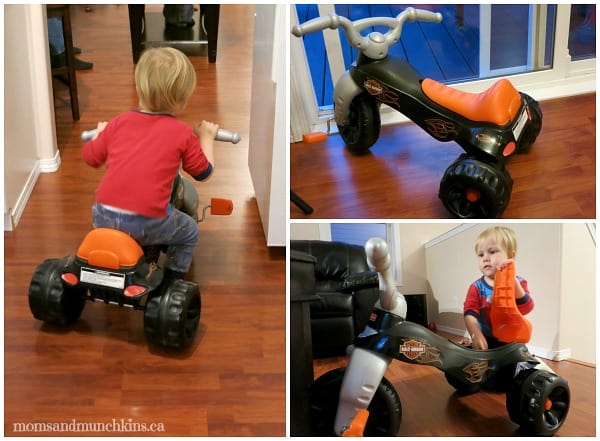 What advice do you have for gift ideas for toddlers? Was there a particular toy that your child couldn’t get enough of? Let us know in the comments below.