Did you know that Thomas is almost 75 years old? Thomas the Tank Engine was created many years ago by a father (Reverend Wilbert Awdry) for this son (Christopher). Thomas & Friends has been enjoyed by children for decades! The stories, toys and characters are about teaching children about teamwork through imaginative play and creative storytelling. This month we had the opportunity to try out a couple of Thomas and Friends toys – the Take-n-Play Adventure Castle Track set and the TrackMaster Castle Quest set. 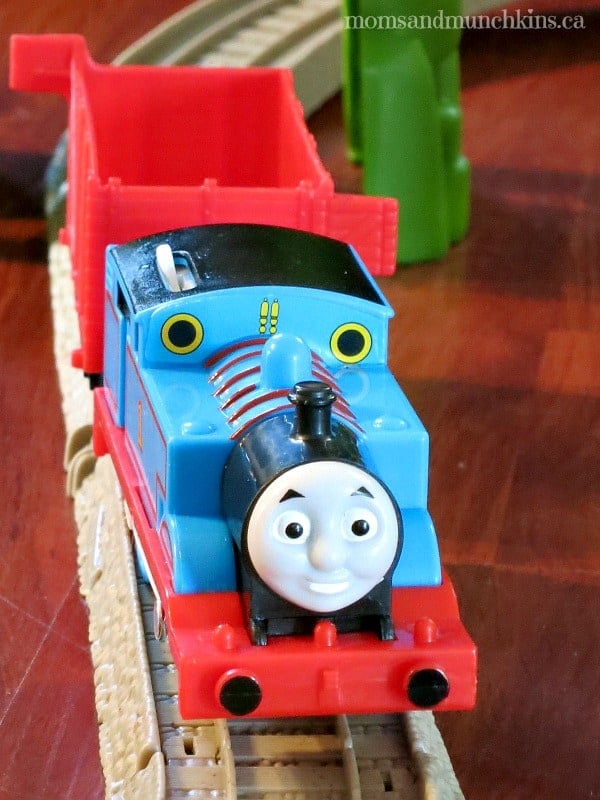 I love receiving special deliveries for my little guy when he’s taking his afternoon nap. I try to build the toys while he is sleeping so that he wakes up to a fun surprise. I started building the Take-N-Play Thomas’ Adventure Castle Track set first and it was pretty easy to put together. My son is two years old so he’s a little under the recommended age for this toy but he still loves it. I took off the smaller pieces until he gets a little bit older because he takes them off and I find them later under the couch and table. 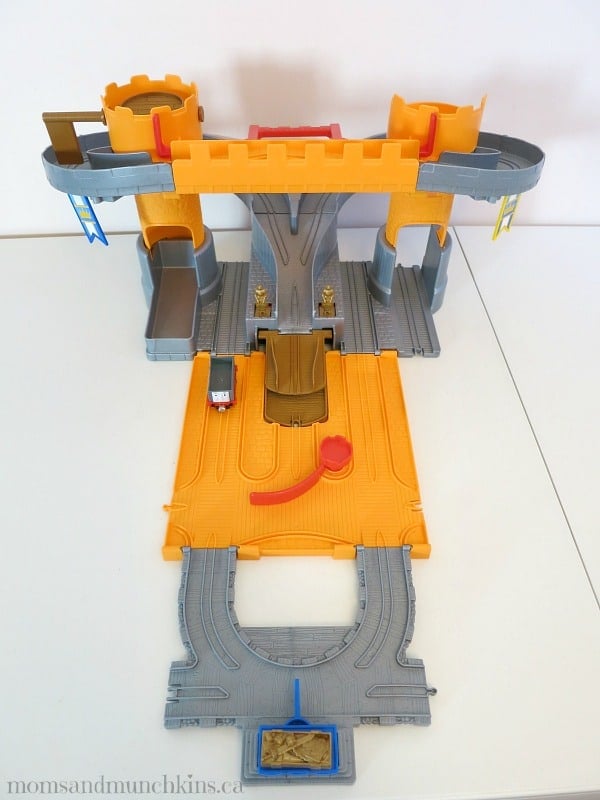 He loves carrying Thomas – his new little buddy – around with him and was introducing Thomas to the rest of his toy friends as well. Thomas even got to ride Galahad the horse! 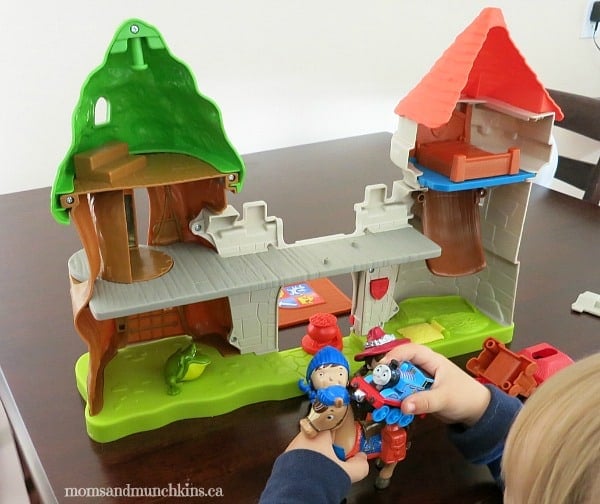 My mom’s house is loaded with toys. I mean LOADED! She has classic Fisher-Price toys from my childhood, toys she’s picked up at garage sales for the past 15+ years and new toys that she just can’t seem to pass by at the store. Even though Nana & Papa’s house is filled with toys, my son loves to bring along some of his toys from home sometimes to show Nana & Papa. This Take-n-Play toy folds up easily and has handles so that it can easily be packed up and taken outside, to a friend’s house or even Nana & Papa’s place. 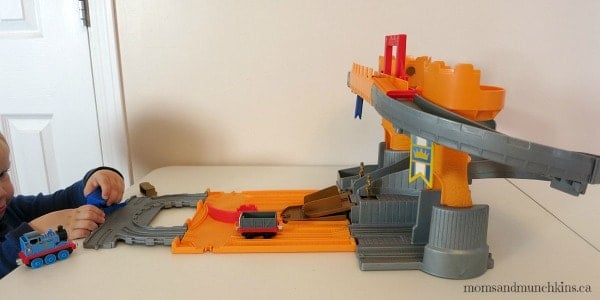 When we first opened this toy, we had a tough time building it. Both my husband & I were tackling this project and we couldn’t figure it out. It could have something to do with the little fingers of one excited little boy that insisted on playing with it before it was built. We had to put it away and try another day during nap time. I’m happy to announce that the next time we tried to put it together we had it built within five minutes! 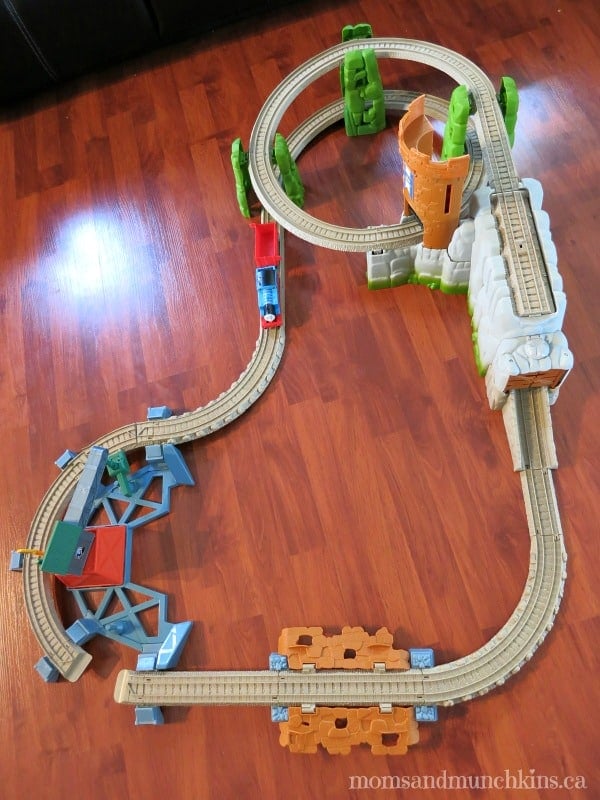 My son woke up from his nap and was so excited to try out this new train set. He kept holding up Thomas like he was trying to say “Look Mom! New toys!”.

This toy is inspired from the Thomas and Friends King of the Railway DVD (released September 24, 2013).

Thomas is being sent on a quest for the missing King’s Crown in and around the crumbling castle grounds! With 5 exciting close calls, Thomas will need to power through the old walls that block his way, make it over the missing track, climb to the top near the castle turret and finally reach a…DEAD END! In a final close call, Thomas drops into the abandoned mine where he has found the king’s long-lost crown! Comes with Thomas, cargo car, king’s crown and multi-level track set.

This toy is recommended for ages 3+ but my 2 year old loves it. He sits right in the middle of the track and helps Thomas go through the track. I was worried that he’d keep pulling off the track pieces but (even with a not-so-gentle two year old) the track stays together well. 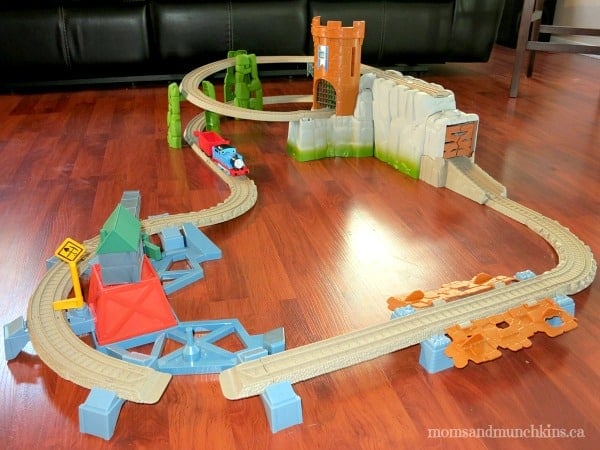 My son doesn’t talk a lot yet but I love watching his little personality come out through play. I can see that he has a big imagination and a kind heart with the way that he takes care of his toys and carries Thomas around the house.

This exciting new movie releases on September 24th, 2013. Twenty-one lucky Moms & Munchkins readers were given free tickets to the blue carpet screening of the movie held on September 21st at theatres across Canada. 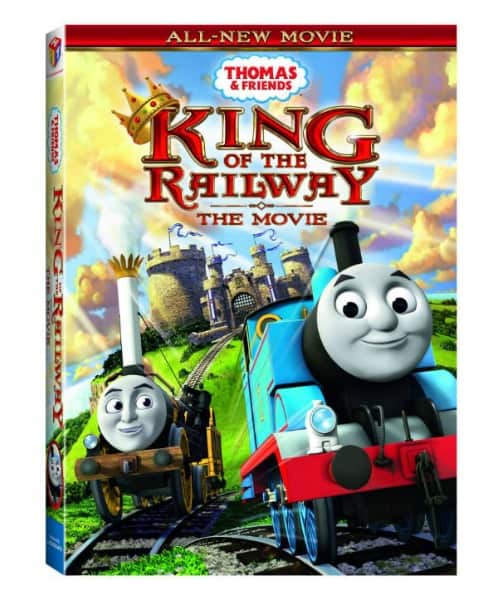 *Disclosure: I receive special perks as part of my affiliation with the Fisher-Price Play Ambassador program with Mom Central Canada. The opinions in this blog are my own.

2 thoughts on “Fun With Thomas and Friends Toys”