I am always amazed when I see my son learn a new skill. He is two years old now so he’s growing more and more each day. As each day passes, I can see more of his personality coming through and it is so cute to watch! Although he can’t say “I’ll do it” yet, he does move my hand out of his way if he’s trying to do something for himself. When he is playing with his toys, he prefers to do his own thing so I sit back and watch his little characters have baby babble conversations and I laugh along with his jokes even though it’s apparently an “inside joke” between him and his toys. As you watch children learning through play, you can really learn a lot about their personality. For instance, my son is always kissing his Little People characters – this shows me that he has a sweet heart. He often takes toys apart and tries to put them back together – this shows me that he is interested in learning how things work.

What I’ve learned is that he needs to discover his own way to play with his toys without someone correcting him on what a toy is supposed to do. For example, his Wheelies Stand ‘n Play Rampway may be designed for racing cars but if he wants to use it as a water slide for his Little People then that’s okay too.

We’ve received two new toys from Fisher-Price: a Minnie Polka Dot Jet and a Mike the Knight Glendragon Castle Playset. As with all his Fisher-Price toys, he has been having a lot of fun with his two new treasures!

Our son has a Little People pink bus that he never wants to put down so when we saw the Minnie Polka Dot Jet, we knew he’d love it. He’s really into transportation vehicles right now and he loves bright colours. 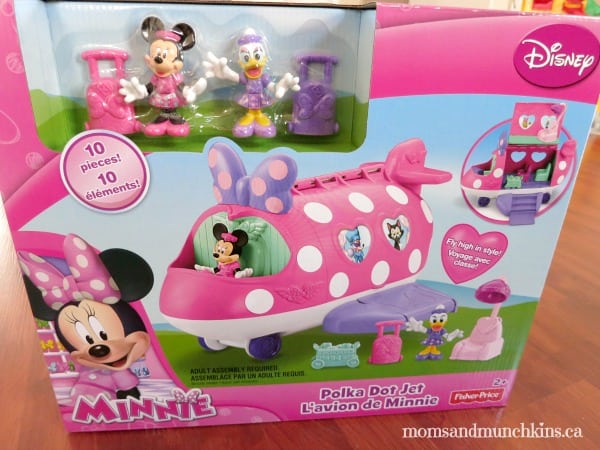 I put the new toy together (just a couple of pieces to snap together) while he was taking a nap and it was no surprise that he ran to it when he woke up.

What I thought was adorable was watching him so gently fold out the stairs and then have each of the ladies (Minnie Mouse and Daisy Duck) take turns climbing into their jet.

Not only is it a cute jet (how could you not love a pink polka dot jet with a bow) but there is also a hair salon on board. No, I’m not kidding! This takes flying first class to a whole new level!

The Mike the Knight Glendragon Castle Playset is a little boy’s dream come true! With fun sounds, a horse, a brave knight, a treasure chest with magical gold, a cool catapult and other fun accessories, it’s easy to see why children love it. 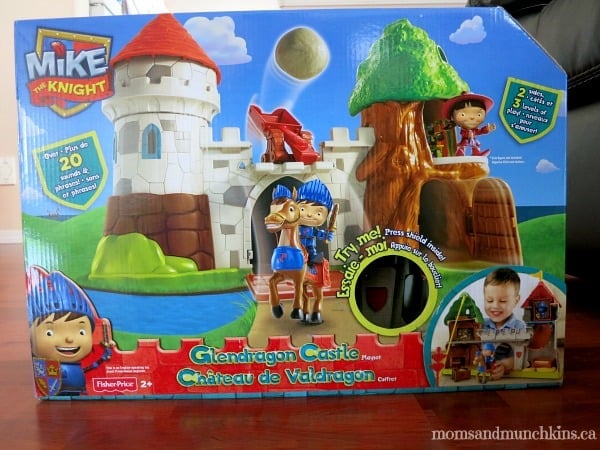 This toy has a lot of secret treasures like a hidden slide, a secret revolving door in the tree, a treasure chest filled with gold that magically disappears and more. I wanted to see how many of these secret treasures my son could find on his own. 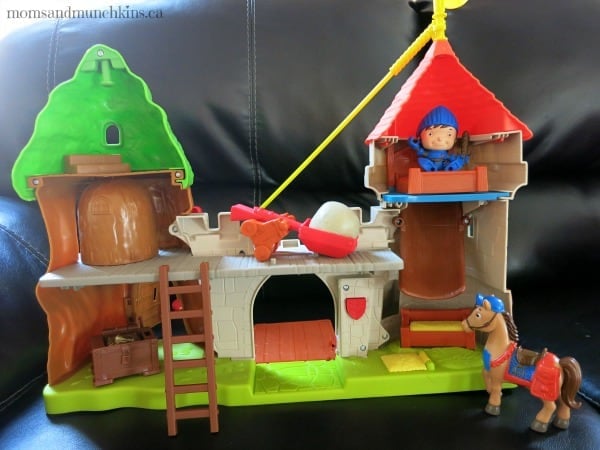 He was able to discover all of the hidden treasures on his own but his favourite part of the toy is the catapult. At first he’d lightly tap it and the ball would slowly roll out but then he discovered that the harder you hit it, the further the ball would fly. I loved his squeal of excitement as he’d watch it fly in the air and then chase it.

There are many ways to encourage children learning through play with creative toys and even some supplies you already have around the house. Check out the Fisher-Price Joy of Learning Guide for some fun activities you can try at home today!

Stay updated on the latest Fisher-Price news by following Moms & Munchkins on Facebook and joining in the conversation on Twitter with the hashtag #FisherPriceMoms.