This post is courtesy of our travel contributor Mary of Calculated Traveller Magazine…There are so many ways to have fun with the whole family in Houston, Texas from the Houston Space Centre to the Kemah Boardwalk but I thought I’d share a little bit about my adventure at the Downtown Aquarium Houston. It’s a great place to spend the entire day and centrally located right in the heart of the city near the Theater District. 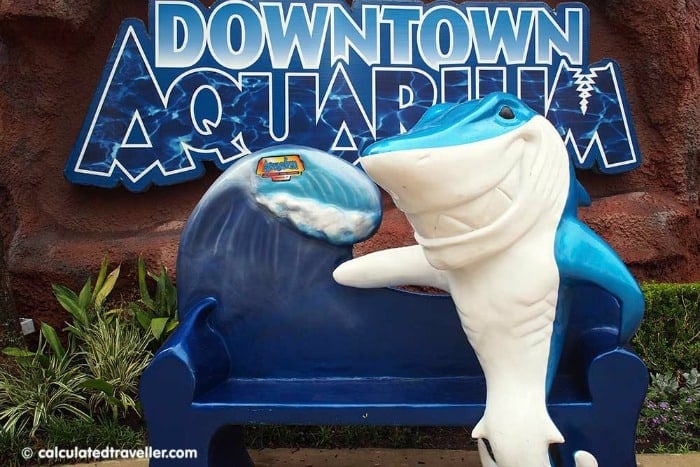 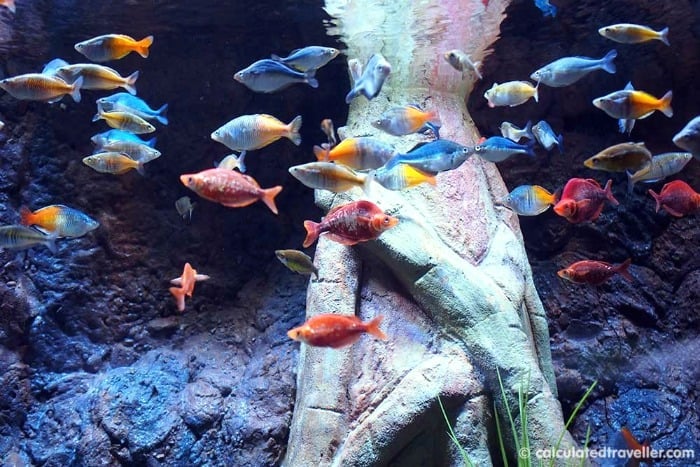 The 6-acre Downtown Aquarium is best described as an entertainment complex as it’s much more than just an aquarium; it also contains an amusement park and a restaurant/bar.

The amusement park area features a Ferris Wheel, Carousel, splash zone as well as other rides and midway games. There are also souvenirs and refreshments for sale. The rides and splash area, in particular, is a great spot for the kids to burn off some of that pent-up energy! 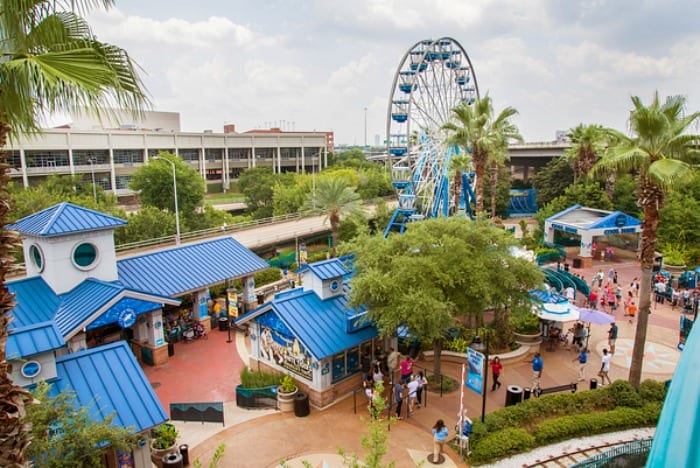 One notable ride is the Shark Voyage, a train ride that takes visitors through the centre of a 200,000-gallon shark tank, home to a variety of shark species such as nurse sharks, tigers sharks and sawfish. 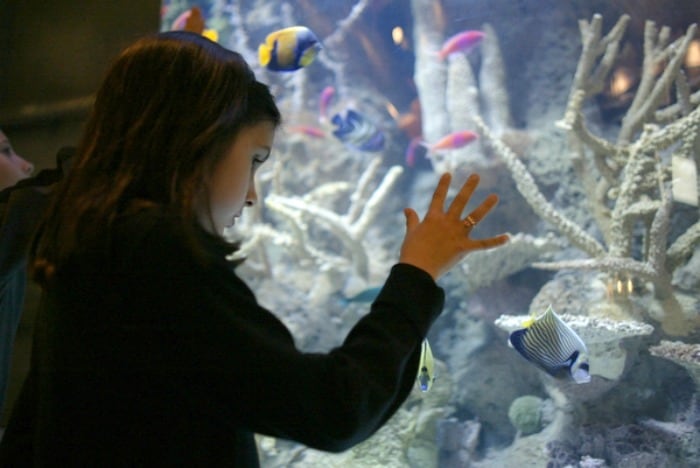 With 500,000 gallons sea life and animal life on displays – there is a lot to see in the Aquarium Adventure. Separated into different sections such as Louisiana Swamp, Rainforest, and the Gulf of Mexico, there are seven “rooms” to the entire exhibit. Each section is decorated to reflect that region of the world complete with sound, music, and lights to create just the right atmosphere to enhance the displays. There are interpretive and educational signs throughout. 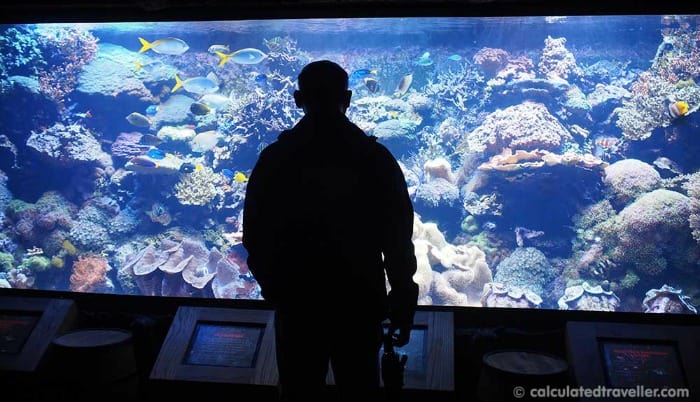 I find the jellyfish exhibits mesmerising. I could spend hours watching their undulating forms as they move through the water. I love how they use changing coloured lights to illuminate the tank making the transparent jellyfish look so magical. 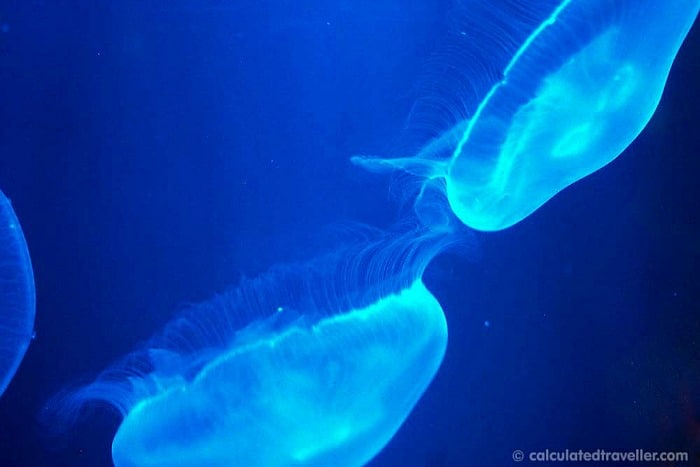 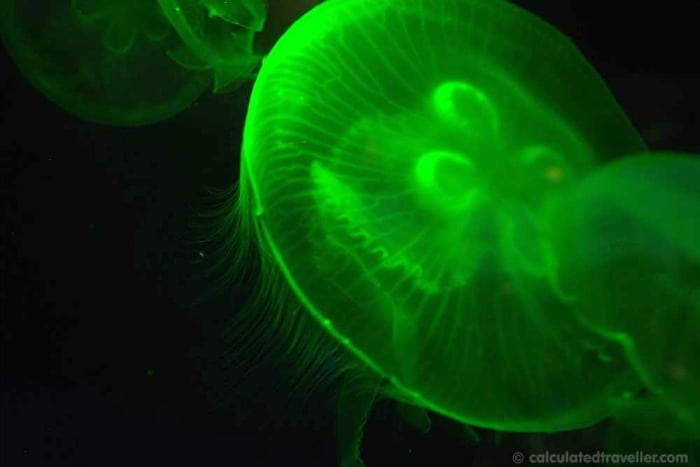 Not only do they have exhibits of creatures that live in the water but that they also have animals that live near the water such as snakes, lizards, frogs, insects. 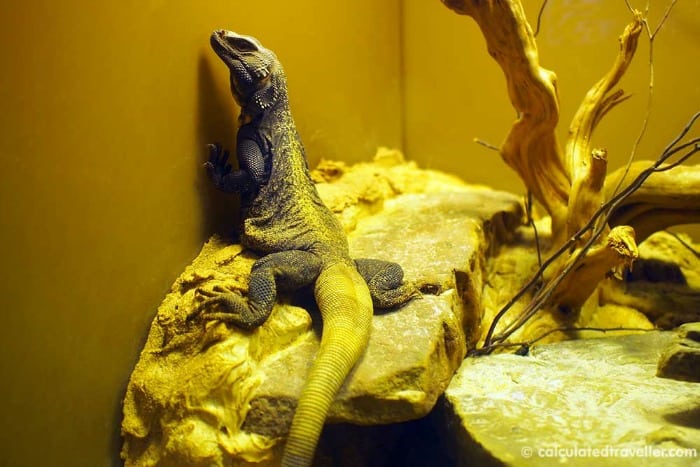 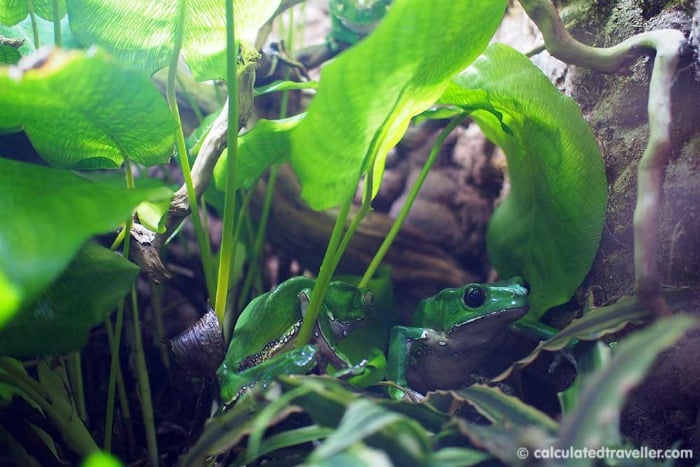 One major exhibit in the Aquarium Adventure is the “White Tigers of the Maharaja’s Temple”. The Downtown Aquarium is home to 4 white tigers born in captivity; two males, Nero and Reef and two females, Marina and Coral. 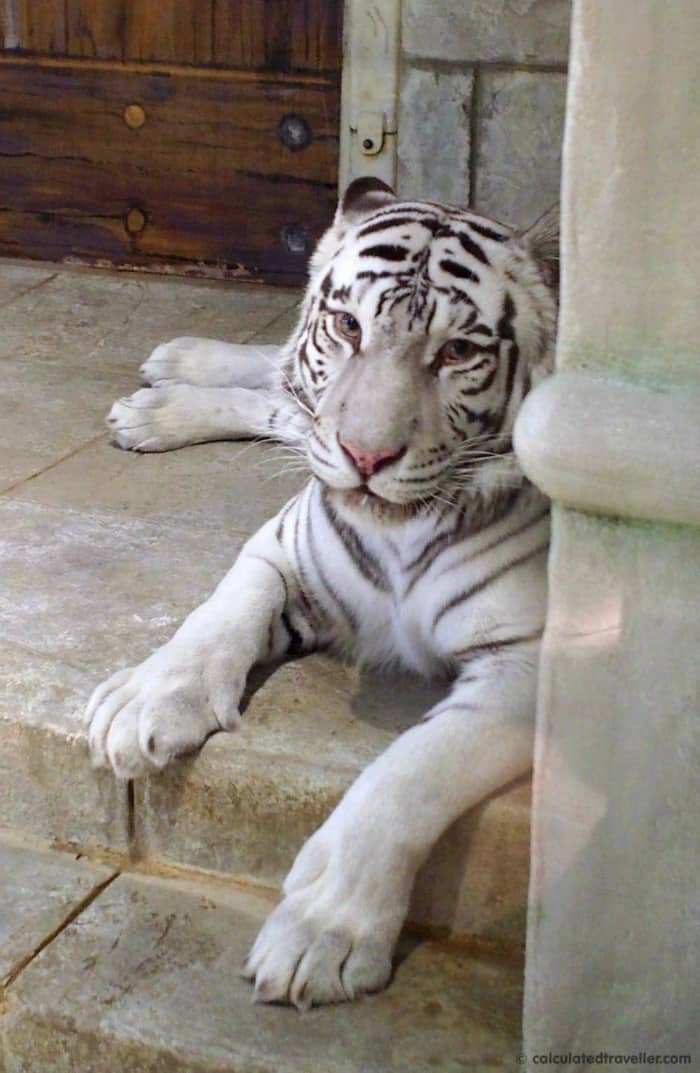 The history of the white tigers is interesting.

According to one of the signs on display, all white tigers born in captivity in North America can be traced back to one single white cub captured by the Maharaja of Rewa in 1951.

I had always thought that they were albino tigers but they are white due to a recessive gene. There is no exact number as to how many white tigers exist in the world but estimates are 1 in every 10,000 is white.

Included in your Aquarium Adventure ticket is also the Stingray Reef touch tank. 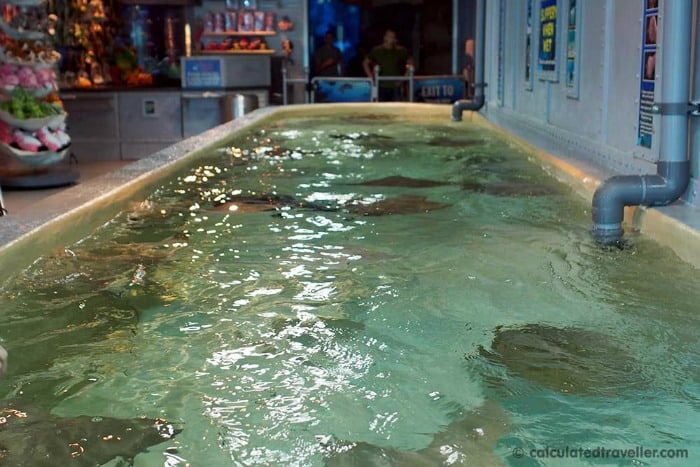 I’ve been to a few touch tanks at other aquariums before but never have I seen so many stingrays in 1 tank before. Put your hands into the stingray tank and you can feel the roughness of the skin on top of the ray and the smooth underside of their body at the underneath.

You can also feed the stingrays (food is an additional fee). There are instructional signs and staff available to instruct you on how to feed the rays.

The restaurant is on the upper level of the aquarium by way of a circular stairwell, which spirals around an amazing round 2-floor high tank. (Imagine this in your house?!) 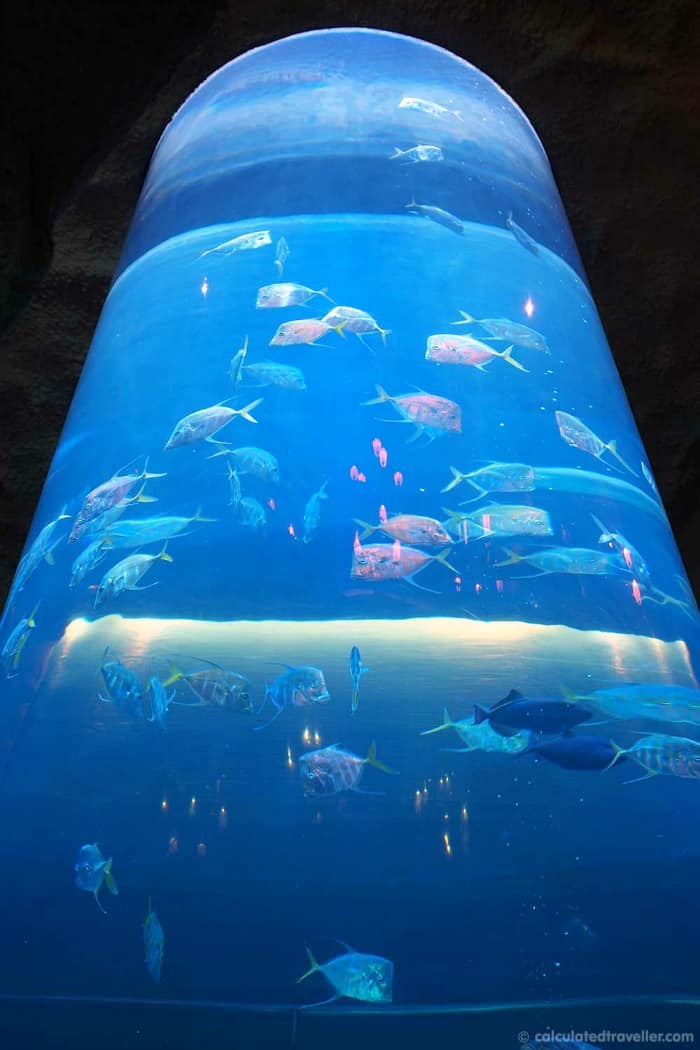 The dining room tables and chairs sit around a 150,000-gallon floor to ceiling aquarium making it the perfect location to dine among the fishes. I think this would make a great birthday party spot for a big fan of fishes.

The menu features seafood but also offers standard fare and a children’s menu.

In the evening, the Dive Lounge turns into an upscale full-service bar/lounge.

With so much to do right in the centre of Houston, the Downtown Aquarium is a great place to visit for the entire day. 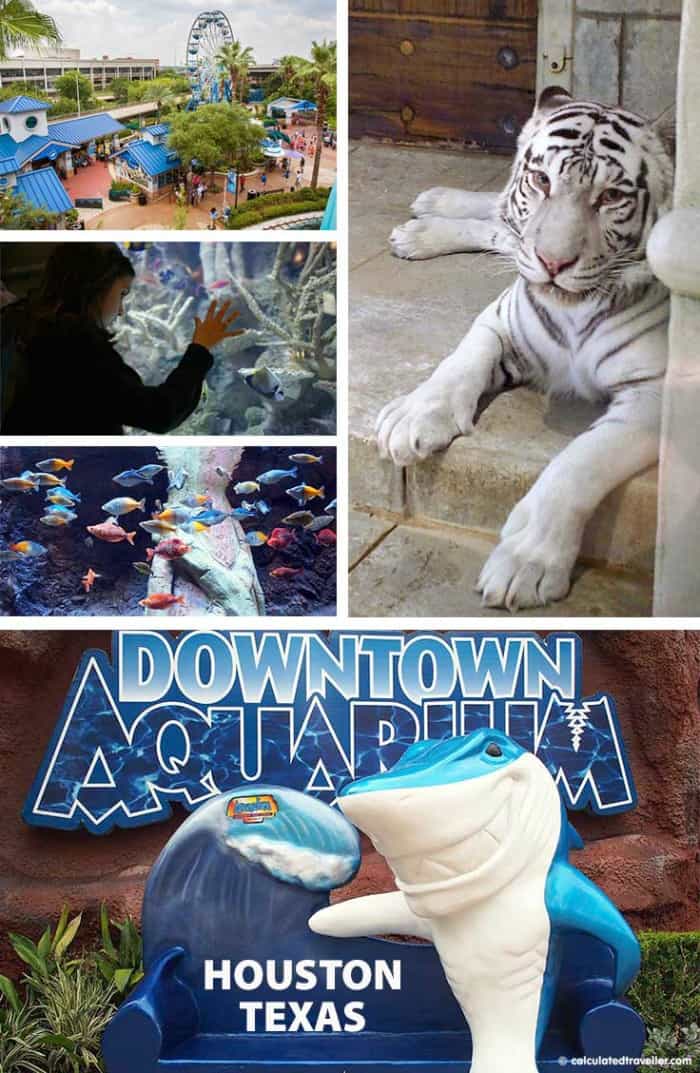 Downtown Aquarium is also one of the attractions included in the CityPass Houston Ticket program. For one price you get access to 5 attractions within the city of Houston Texas for a period of 9 days.

Travel assistance provided by Visit Houston. All opinions expressed are those of the author.