When I received the call from Disney inviting my family on this magical adventure, I couldn’t hold in my excitement! I have been to Disneyland twice in the past (once when I was 12 and again at 21) but my husband and son had never experienced the wonders of Disneyland. I couldn’t wait to get to California and share the magic of Disneyland with them! We were staying at the breathtaking Disney’s Grand Californian Hotel & Spa (click here for an extensive hotel review) which has a private hotel entrance to Disney California Adventure park. Even though we were up for an early morning flight, we were ready to start exploring the park the moment we arrived!

Taking our son to Disneyland has always been at the top of our list for fun things to do with him. Although my son is not quite two years old, there were still loads of fun activities and attractions for him at the park. Disneyland is a great place to take toddlers – I’ll tell you more about this in a special Disneyland with Toddlers post (click here to read Disneyland for Toddlers). I think you’ll be pleasantly surprised at how toddler-friendly it is…but would you expect anything less from The Happiest Place on Earth?

After passing through the main entrance to Disney California Adventure, you’ll arrive on Buena Vista Street. Here you’ll find a few restaurants, a market, some food carts and an information booth. During our last night at the park, I enjoyed a supper at the Carthay Circle Restaurant and it was absolutely delicious! The house biscuits are small round balls of dough filled with cheese, bacon and jalapenos and they are as good as they sound. Seriously – I wanted to stuff my purse full of them! 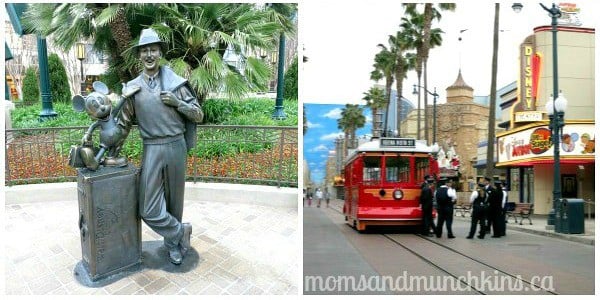 After walking through Buena Vista Street you’ll arrive in Hollywood Land which is filled with interactive attractions. Our favorite was the Disney Junior Live on Stage show (click here for a fun review and videos). In the Disney Junior Live on Stage post you’ll find information about the show, the characters and videos of some of the cool special effects that your little ones will love.

An attraction that really made me laugh was Turtle Talk with Crush. Remember the turtle from Finding Nemo? He has his very own show in Hollywood Land where guests can have a special meet and greet with him. It’s an interactive show where he talks to the audience and the audience can ask him questions. This turtle has a great sense of humor! 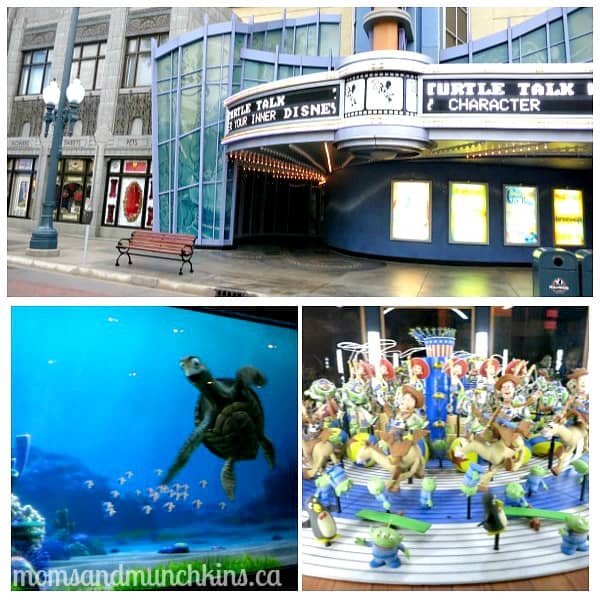 While walking down the streets of Hollywood Land we ran into Handy Manny! My little guy absolutely loves watching the Handy Manny show on Disney Junior so we were really excited to have his picture taken with him. Our little guy was a little shy but still smiling. We weren’t sure how he’d react to characters at the park but we were hoping he wouldn’t run screaming! He was a little shy with all of them but still excited to go up and meet them.

Hollywood Land is also where you’ll find the Muppet*Vision 3D show. Unfortunately, the Muppets were on a vacation during the time we were at the park so we didn’t have a chance to see them. I have seen the show during a previous visit to the park though and it was a lot of fun.

Also while in Hollywood Land we raced through Monstropolis with Mike, Sulley, Boo and the rest of the characters from Monsters, Inc.

My husband tried The Twilight Zone Tower of Terror and he had a blast! Have you ever had a nightmare of crashing in an elevator? This frightening ride will bring that nightmare into reality! For those of you looking for a terrifying ride – this is the one for you!

Pacific Wharf is a great place to sit and relax while enjoying a meal. You can enjoy a variety of different foods while sitting outside and watching the excitement throughout the park and (as my son quickly discovered) there are plenty of ducks and birds excited to share lunch with you!

At the Pacific Wharf Cafe, they serve a variety of meals inside sourdough bread bowls – a delicious secret family recipe dating back to 1849. Just how delicious are these bread bowls? In one day my husband ate three of them! That’s right – three! One filled with eggs and bacon for breakfast, one filled with clam chowder for lunch and then another filled with clam chowder for supper. That was almost a week ago now and he’s still talking about it! 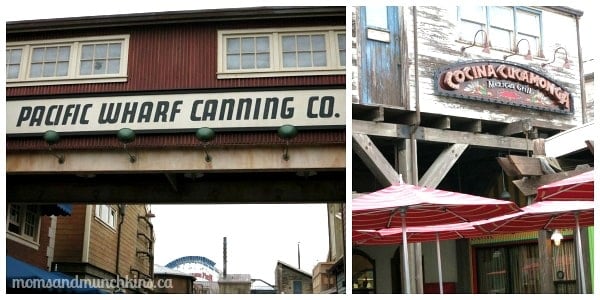 This area is perfect for toddlers! There is the gentle train ride of Heimlich’s Chew Chew Train, a Princess Dot Puddle Park to play in to cool off, the Francis’ Ladybug Boogie and more!

As we arrived in “a bug’s land”, the first ride we saw was Francis’ Ladybug Boogie and there was no line to get on so we hopped right in. We had already tried the Mad Tea Party ride in the Disneyland Park and this one looked similar so we knew my son would love it. There I was, camera in hand, ready to capture his smiles as the ride started up. Well let me tell you…this is one wild ladybug! I started sliding away from my son and my husband was trying to hang onto the cart and my son at the same time. We were all laughing a lot but it was certainly not what we expected! Riding this wild ladybug was one of the funniest moments of our trip!

Cars Land is the newest addition to Disney California Adventure. To describe it in one word – Ka-Chow! There are so many fun attractions in this newest addition that I’ve written a separate post dedicated to Cars Land (click here to read). This Cars Land post includes loads of photos, fun videos on the rides and more! 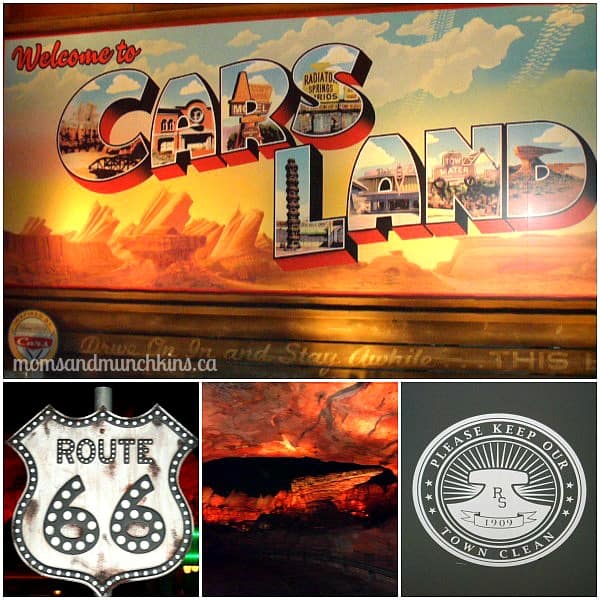 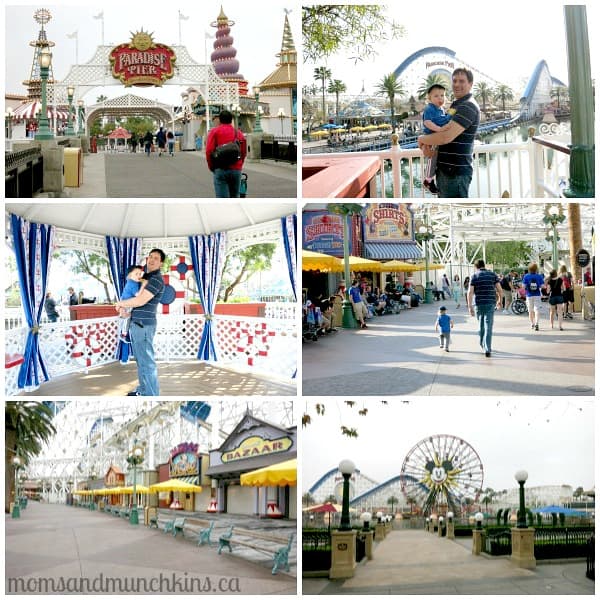 When I was 21, I traveled to Disney California Adventure with two friends and the mother of one of my friends. Before the trip my friend’s mom said “I’m not going to try any rides. I’ll just be the purse holder”. Well, that quickly changed once we arrived at the parks and started seeing everything that the parks had to offer. One ride that we couldn’t get enough of was the California Screamin’ coaster. It was so much fun! The mom who thought she’d be the “purse holder” all weekend ended up being the one screaming and laughing the loudest on this ride!

My husband, son and I tried the Toy Story Midway Mania 4D attraction. You are given 3D glasses to wear while sitting in your little cart trying to knock down targets with your mini canon. My son absolutely loves Toy Story so we knew this was one ride we had to try.

My husband gets motion sickness on rides that go upside down or ones the spin fast. He knew he couldn’t handle the California Screamin’ coaster but he was excited to try the more gentle Goofy’s Sky School. My son and I waited for him at the bottom of the ride and he came off laughing because he said he was screaming during the ride and there were kids laughing at him. He had a blast on it – even if he embarrassed himself!

As a family, we went on the Ariel’s Undersea Adventure attraction. My son loved this one with all of the colors, music and special effects. He kept waving a the characters as we rode past them.

There are two attractions inside Grizzly Peak – Redwood Creek Challenge Trail and Grizzly River Run. My husband used the FASTPASS option for the Grizzly River Run and had a lot of fun on it. He got a little wet but he liked the chance to cool down a bit.

Have you heard of FASTPASS? At specially marked attractions, you can simply insert your theme park ticket into a machine and it prints you out a special FASTPASS ticket. This ticket give you a time range to come back to the ride and go in the special FASTPASS line. It’s a shorter line than the regular line for the attraction and you usually have little to no wait time. It’s a great way to enjoy more of the attractions around the parks without waiting in a lot of lineups. 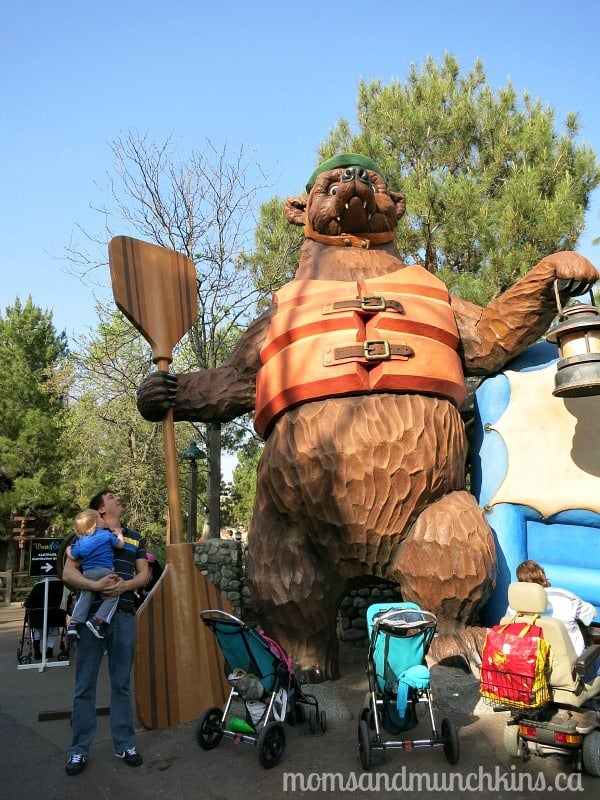 Condor Flats includes the fun Soarin’ Over California attraction. This simulated hang glider flight soars over some of California’s most famous landmarks. While feeling the wind in your hair and smelling the oranges from the trees below, you’ll feel like you really are soaring over California! 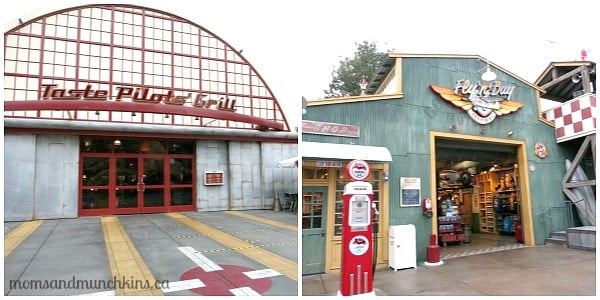 My son loves Toy Story and Cars so we knew we had to catch the special Pixar Parade. We knew he loved it because he kept saying “Wow Wow!” as it went by.

You may have seen videos of the World of Color show in Disney California Adventure but it won’t compare to watching it in person while feeling the mist of the water in your hair and the heat of the fire on your cheeks. 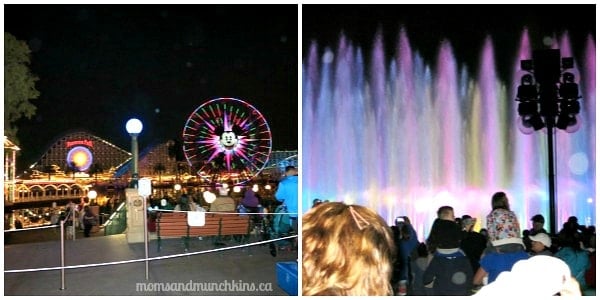 This show runs on Paradise Bay and includes amazing water effects, stunning lights and videos playing on the water and cool special effects with fire. I simply can’t say enough great things about this show and I highly recommend it goes on your “to-see” list while visiting the park. Here are a couple of video sneak peeks for you – the first is a portion of a song with Ariel and the second is a portion of the Pirates of the Caribbean (my favorite part!).

For more fun posts on our Disney adventures, check out our special page dedicated to Disney fun!

*Disclosure: My family was invited on a magical vacation to the Disneyland Parks and the beaches of Orange County. My flight, our hotel, park passes, meal vouchers and other various perks were provided to me as part of this adventure. All opinions expressed here are 100% my own.