With Earth Hour quickly approaching (Saturday, March 23rd, 2013 from 8:30pm to 9:30pm local time), I thought there was no better time to share some fun flashlight games with you!

Before I get into the ideas for flashlight games, I want to remind you of a fun post I wrote on Power Outage Activity Ideas. That post is also filled with fun activity ideas to enjoy when the lights go out. You may want to think about packing one of these activity boxes away in case of a power outage. 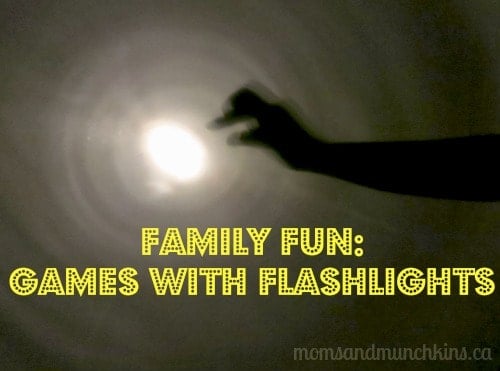 Shadow Puppet Charades: This charades game is really easy to play and it is sure to cause some giggles! Simply write various animals down on small sheets of paper. Fold each of these pieces of paper and put them into a bucket. Each “actor” takes a turn randomly selecting an animal charade. Another player will shine the flashlight on the wall while the “actor” uses his hands in front of the flashlight to try to create a shadow puppet that looks like this animal. The other people on his team will have 1 minute to guess the correct answer.

Tracing Shadows: For this activity, you’ll need a large roll of brown craft paper, some painters tape and washable markers. Tape strips of brown paper on the wall (one piece of paper for each family member’s shadow – make the strips the size of profiles which is the side view of a person’s face). Each person will take a turn sitting in front of the flashlight with their head turned to the side. The other players will then trace the profile using the shadow image on the brown paper.

Flashlight Tag: For this activity, you’ll want to use a small laser light (like the ones that cats love) or place a cone on the end of the flashlight so you end up with a smaller spotlight. One person will be responsible for shining the flashlight on the walls and floor while the other players run around trying to catch the light.

Shadow Dancing: For this activity, hang a sheet and place a flashlight behind it. Family members can have fun making up silly dance moves with shadow puppets while standing behind the sheet. The audience will sit on the other side of the sheet watching the silly shadow dancing and puppet shows.

Do you have any favorite flashlight games? How do you pass the time when you have a power outage?