This post is by our blog contributor Carolyn…Do you have a place to go where you feel completely relaxed and refreshed? For me it is with Mother Nature – especially in the mountains. The serenity and quietness of the surroundings are a soul cleanser and I cherish the times I get to spend there! Recently my family and I drove from Edmonton to spend the weekend in Banff National Park. It is Canada’s oldest national park and is located in the Rocky Mountains of Alberta, Canada. It is home to ice fields, hot springs, forests, wild life, and various activities and attractions for people of all ages. My boyfriend and I have a spent a few different occasions there without our son and experienced the shopping and the night life. It was always a lot of fun so we were elated to have an opportunity to share the beauty with our favourite boy and excited to see a new side of the town. 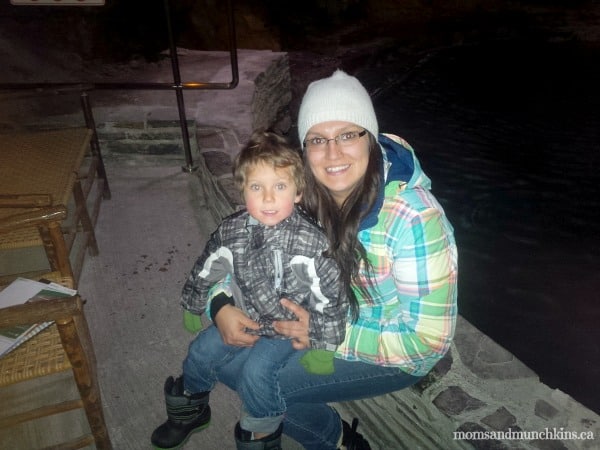 We arrived at the Banff National Park gates around noon on a Saturday and there were line ups in all the kiosks. Luckily we had a Parks Canada Discovery Pass and zipped right by the line ups and into the park! The Parks Canada Discovery Pass will give us access to over 100 of Canada’s National Parks, conservations areas, and historical sites. Where should we use it for our next adventure? Let me know in the comments below.

My heart flutters every time we enter the park gates. I watched out my window intently and was excited to point out the mountain peaks, streams, waterfalls, and a small herd of deer to my son. We had planned on visiting the Cave and Basin National Historic Site and the Banff Gondola on Sulphur Mountain that afternoon. 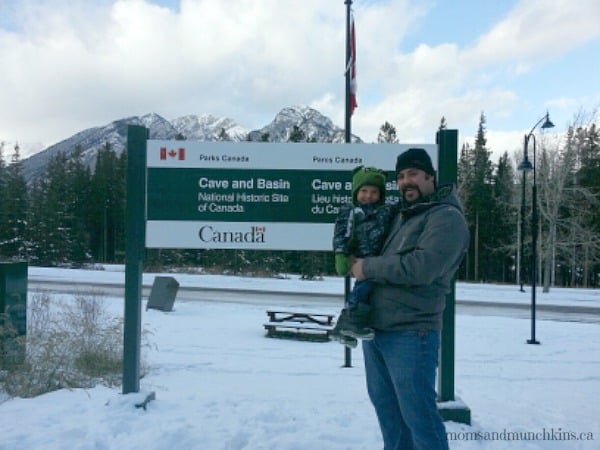 I didn’t do research on the Cave and Basin National Historic Site before we visited it so I thought it would be a quick look at a pool and we would be on our way. In actuality, we stayed for a couple hours. The cave was like nothing I had seen before! The sun was shining in from the top of the cave onto the crystallization on the walls. My son was first to see the endangered Banff Springs snails and we counted how many were along the walls. The exhibit room had interactive displays and artifacts and I was able to watch videos on the history of the hot springs and Park Canada! I’ve always been a bit of a history geek so my son could have been running wild, but I was too engrossed in the reading and listening to notice – thank goodness for daddy’s and exhibits you are able to interact with! 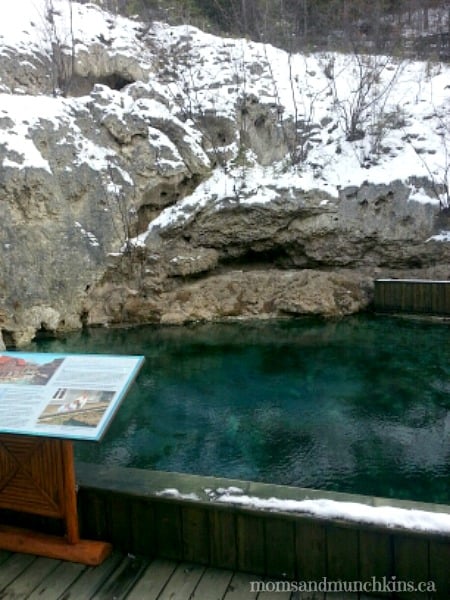 In another area there was the “Pool Deck” where activities for children were available. Colouring pages and a building a log cabin were my son’s favorite. The “Pool Deck” has a showing of an informational video throughout the day but, being with my squirmy two year old, I decided to save the viewing for an occasion I had more time. 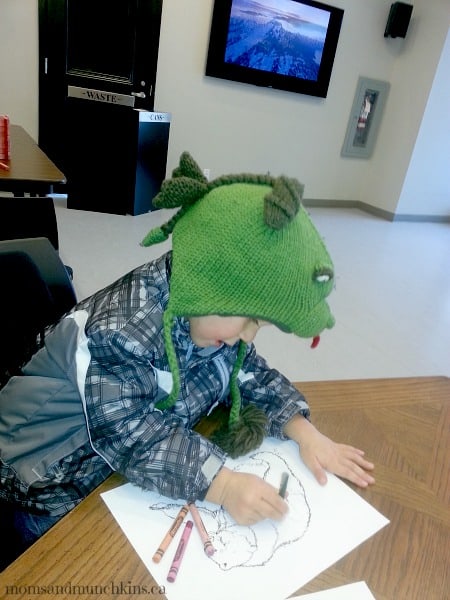 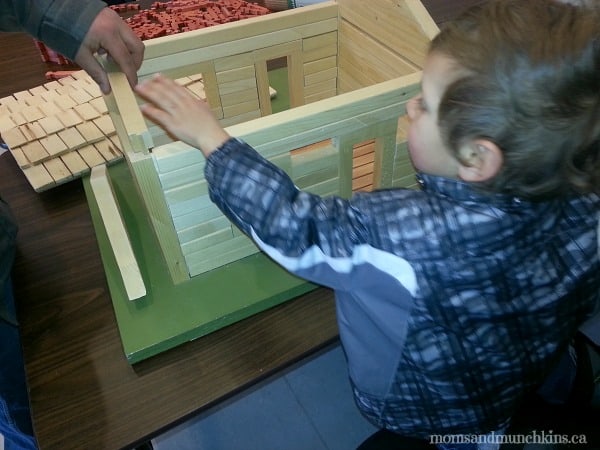 We ended up having an early supper and by the time we were done it was getting dark, so we decided to try the Banff Gondola the next morning. We had a quiet night at the hotel’s pool. After swimming we had a craving for something sweet and I decided to set out and look for a place to get ice cream. One reason I love Banff is the close proximity of the stores, restaurants, and other shops! I stepped outside, crossed a street and was downtown. The streets were still bustling with activity. I stopped in a couple stores, spoke to a couple locals, and got invited to an open mike night which I will remember about on my next grownup visit to Banff!

We woke up the next morning to fog but decided to go up the mountain and see if it was clear at the gondola site.  The gondola staff with the great accents (another reason I love Banff is meeting people from all over the world), told us we would have a better experience later in the afternoon when the fog dissipates.  Conveniently, The Banff Upper Hot Springs, are around the corner from the gondolas so we decided to head there.

We called the front desk ahead of time to ensure the pool would be appropriate for our young son and they said they have young children often. They do require swim diapers for those that are not potty trained and suggest the children stay in the pool for only 10-20 minutes. It is advised the children take a break on the pool deck or inside after 10-20 minutes. 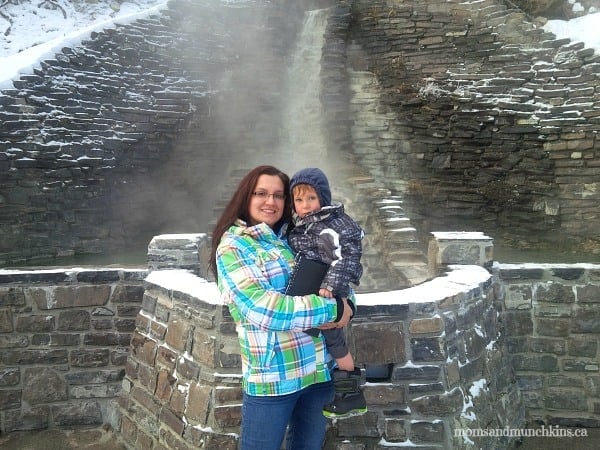 We arrived before the doors were open for the day and I stood in line while my boyfriend toured the area with our son, making snow balls and watching a hot springs waterfall. The Banff Upper Hot Springs offers towels as well as vintage bathing suits for both men and women to rent. My boyfriend decided to try out the tan colored suit and let’s just say we had a good laugh at how short they were on him, too bad he wouldn’t let me take a picture to share with you guys!

The hot springs didn’t have a family change room which was a bit of a disappointment because we were hoping to tag team our toddler into his suit. After changing we exited the change room to the hot pool – outside! It was gorgeous!  Even with the fog, we could see the mountains. Breathing the crisp cold air was refreshing. The pool filled up quickly with other patrons and our son and a couple other children hung out in a very shallow area in the middle of the pool. I was able to block out the busyness of the pool and enjoy the warmth, as well as the view, for a few minutes before I realized my son was getting pretty warm. Even though he was in the shallow area he heated up quickly and the winter air gave him chills. Our hot springs visit only lasted about twenty minutes total in the pool. The Banff Upper Hot Springs won’t be my first choice for an activity with my two year old again but I can’t wait to visit with my boyfriend again. I think it could be romantic under the night sky!

After the hot springs we were exhausted and headed back to the hotel for lunch and a nap. Three hours went by, resting in the mountain air, before we were up and ready to try the Banff Gondola. It was a lot busier than the morning so we were concerned there would be large line ups inside. We were quite entertained with ourselves (as always) when realized there were 40 gondola cars rather than the one or two we assumed. We were the only group at the ticket booth and were in the gondola within minutes. As the gondola was taking off there was a bit of acceleration, I thought we were going top speed all the way up the mountain. At this point fear began to set in, but the car slowed down as we started rising up the mountain at a comfortable pace. Phew, I could relax and enjoy the view…and what a view it was! My son insisted on standing in the middle of the car so he could have a 360 degree view. At the top of the mountain we decided to head straight to the top of the building to the observation deck. My favourite part about the observation deck were the flags and names of different locations around the world, their distance and direction from where we stood on Sulphur Mountain. There are two restaurants below the observation deck, a more formal restaurant called The Panorama Restaurant and The Summit Restaurant, a self-serving area where we stopped for a hot chocolate. 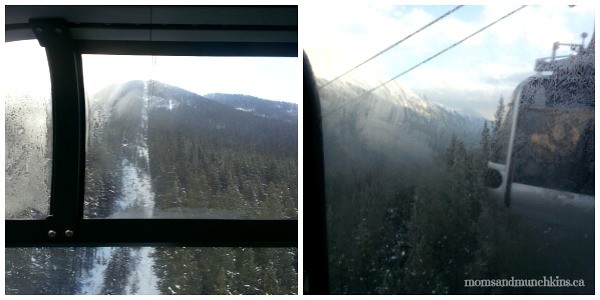 We finished up our mini holiday that night with a walk around town and a long supper at a local restaurant. I feel blessed to live in such a beautiful country and have the opportunity to take a weekend to discover what it has to offer. There was so much more we wanted to do and we are already talking about what’s on our list for the next visit. Ice skating outside, which starts in early December, is at the top of our list. We would also like to visit the summer seasonal museums and venture out of town on one of the driving tours when the weather and roads are clear.

With our discover pass we have access to over 100 of Parks Canada’s sites.  Do you have any advice or stories of places we can visit? Let us know in the comments below.

*Disclosure: I was given a Parks Canada Discovery Pass and attraction passes in exchange for an honest review. All opinions expressed here are my own.