This post is written by our contributor Carolyn…Like most Fridays after school, I sat down with my two daycare boys and my own little one and let them choose something to watch for an hour. Now let me tell you, this is not an easy task with Mr.9 (years old), Mr.7 (years old), and my Mr.2 (years old). They are at different developmental stages, have different attention spans and different interests. It sometimes ends up with me choosing something and watching it all by my lonesome while they run around me.

This particular Friday was different – hooray! I pulled out the Phineas and Ferb: Mission Marvel DVD and Mr.9 said Phineas & Ferb was one of his favorite shows, Mr.7 said the Hulk & Iron Man were his favorite and Mr.2 (my son) ran to his play room grabbed his Spider-Man and connected it to the cover – proud mommy moment of course! We were pleasantly surprised when we opened the DVD to find a Bonus Q&A, Comic and Poster. 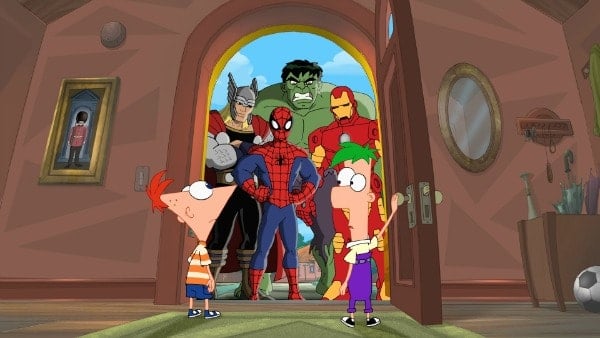 The Phineas and Ferb: Mission Marvel DVD has seven episodes total.  The Mission Marvel is a crossover episode including Thor, Iron Man, Spider-Man, and The Hulk.  Early in the episode the super heroes lose their power while fighting off their enemies when a beam from Antagonist’s Dr. Doofenshmirtz’s “Power-Draininator” bounces off the kids’ space station satellite onto them.  Back at S.H.I.E.L.D. the heroes are told the beam came from Phineas & Ferb.  Meanwhile the Marvel villians want to find the genius who built the machine that caused the loss of powers and are surprised when the find the-not-so-villainous Dr.Doofenshmirtz.  This prompts the antagonists to cause trouble at the Googolplex Mall to bring the heroes to them.  The kids hide the heroes in the S.H.E.D. and build a machine to restore their powers and (as always) their sister Candace interferes and the heroes powers are mixed up.  Her membership is revoked and she leaves upset while stating she was just trying to help.  Meanwhile, the villains betray and cage Dr. Doofenshmirtz after he creates a bigger and better “Power-Draininator”. The heroes, still without power, decide to confront the villains and are aided by Agent P.  Candace and her friend go to outer space and discover the superheroes powers are stored in the space station, bring the space station to earth and restore the heroes’ powers! The heroes defeat the villains and Phineas and Candace make amends. 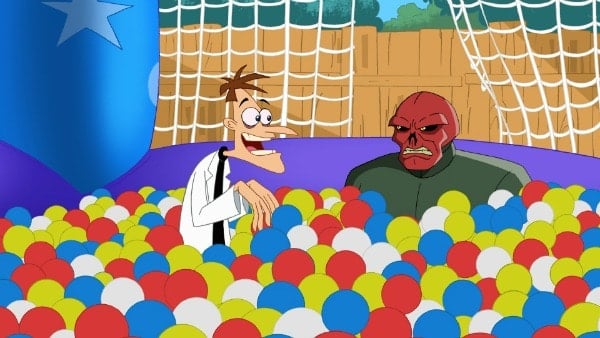 The Mission Marvel episode was an entertaining combination of the action of Marvel and the musical silliness of Phineas & Ferb.  We particularly enjoyed the musical number “My Evil Buddies and Me”. After the episode the boys asked to go on the computer and replay the song and we were excited to discover more Phineas & Ferb videos. I still have the “My Evil Buddies and Me” tune stuck in my head from playing it so much. It’s catchy and it’s making me crazy! The two older boys watched the whole episode but Mr.2 lost interest halfway through.  It had humor that both the older boys and myself laughed at, especially when Iron Man loses power to his suit and he has to be wheeled around on a cart by the Hulk!  It makes me giggle picturing it in my head! 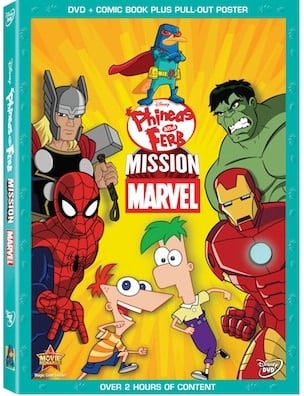 After watching the Mission Marvel episode I pulled out the waffle blocks and the boys built their own versions of Dr. Doofenshmirtz “Power-Draininator” and other “…inator” machines.  Mr.9 built a seven beamed “Carolyn-asleep-inator” which I enjoyed due to the glorious fact I had to pretend to sleep, lay still, and rest my eyes…little did they know I was actually almost asleep.  Mr.2 built a “naternater”. 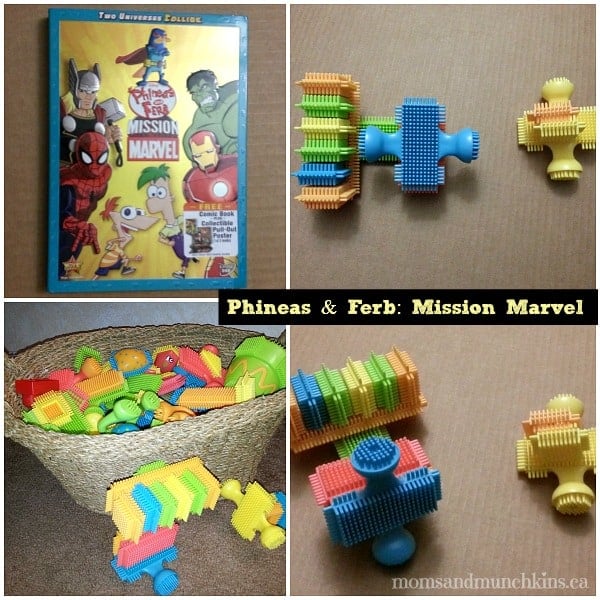 A second activity we decided to do was put sticky tape in the doorway like Spider-Man’s web and then balled up newspaper to throw at the sticky web.  We called the newspaper “Venom” and we trapped the villain in Spider-Man’s web! The idea was discovered via Pinterest but I got too caught up in the moment to remember to take pictures!

This movie is now available for purchase! What activities will your little superheroes play?

*Disclosure: I received a copy of Phineas & Ferb: Mission Marvel in exchange for an honest review.