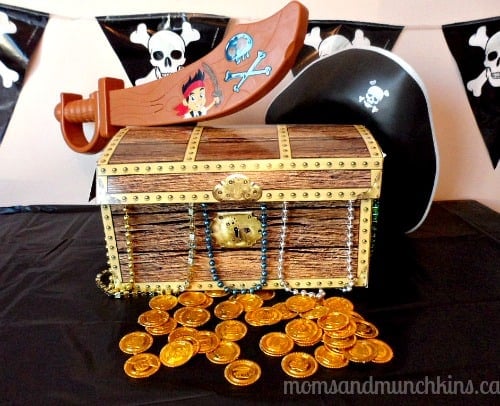 Ahoy, Matey! Have your little ones requested a Jake and the Never Land Pirates party? A pirate party is always such a fun theme for a child’s birthday party and with these special Disney touches, it’s sure to be a party to remember!

To invite your child’s best mateys to your party, you could send a unique invitation in a bottle. The wording on the invitations could include popular lines from the show like:

Disney Junior Canada has free printable flat card invitations for a Jake and the Never Land Pirates party (see the link at the bottom of this post). 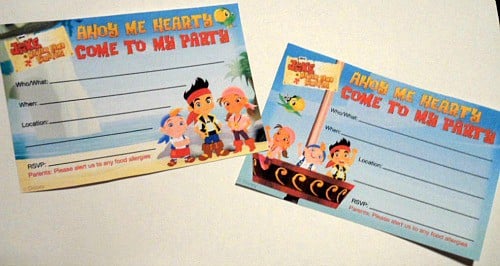 Here are a couple of additional fun options: 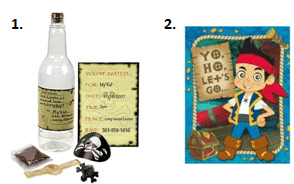 1. Pirate Invitation in a Bottle
2. Jake and the Never Land Pirates Invitation

A fun idea for your party decor is to make guests feel like they’ve just set sail on the Never Sea aboard Bucky (their pirate ship). Here are some fun ways to set the scene: 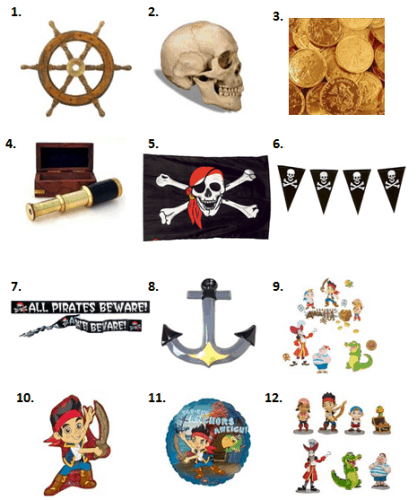 What would a pirate party be without a fun treasure hunt?! There are so many fun ways to mix Jake and the Never Land Pirates in with a fun treasure hunt. You could set it up that Peter Pan has left clues for the kids to find on the way to the hidden treasure. Of course there will be obstacles to overcome – Captain Hook insists on it!

You can start your game by letting all your little pirates know the pirate password – “Yo Ho Ho!”. Your treasure hunt can consist of fun activities like solving pirate problems together and overcoming obstacles. After the players solve each pirate problem, they can be awarded some gold doubloons (chocolate gold coins). As you award the gold doubloons after each problem, you could say “Grab ’em & Go!” like the popular line from the TV show.

The treasure hunt could lead to a treasure chest filled with the favor bags for each of the little pirates to take home. You could leave a big “X” to mark the spot of the treasure.

Some examples of clues & challenges you can leave along the path of the treasure hunt include:

Along the way, Captain Hook could try to detour them by leaving little notes like:

The players will know it was Captain Hook trying to derail their plans if you leave some of Captain Hook’s belongings that he accidentally left behind. Some ideas include:

You could also provide bandanas or pirate hats to the guests to help them look like little pirates. 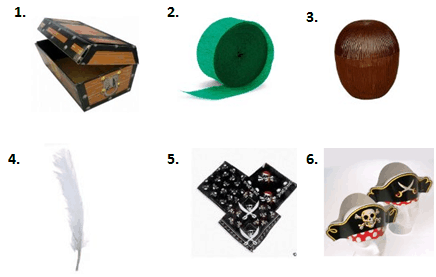 The food area where guests get to sit down, relax and eat could be called the “Hideaway at Sea”. Your food choices could be set out as a “Seafood Buffet” and could include items such as: 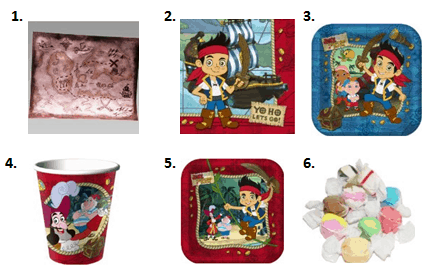 In addition to the traditional birthday cake, some fun dessert ideas for a Jack and the Never Land Pirates Party are:

There are so many fun ideas for creating personalized pirate treasure favors to send home with the guests. You could include little articles of pirate clothing like bandanas, an eye patch, an inflatable sword or a pirate hat. You could also include candy like gold coins and skull gummies. 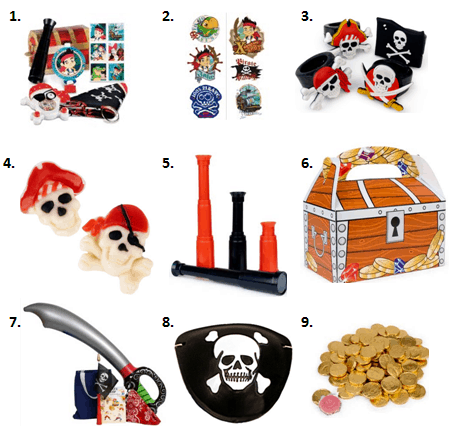 What would you want to find in a pirate’s treasure chest?

For more Jake and the Never Land Pirates party ideas, visit Disney Junior Canada. They have free printable invitations and plenty of ideas for food and activities.

Disclosure:  I am part of the Birthday in a Box & Amazon affiliate programs. I am also a part of the Disney Junior Mom program and I receive special perks as part of my affiliation with this group; however, this post is not sponsored. The opinions on this blog are my own.

3 thoughts on “Jake and the Never Land Pirates Party”