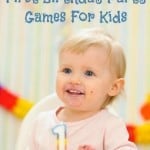 This is a guest post courtesy of Olfa…As you approach the time to plan your child’s first birthday party, you will be excited, a wee bit sad but perhaps also overwhelmed. Planning a party for a baby or toddler can be very difficult when it comes to fun activities to do that other kids will […] 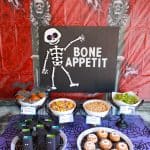 Why did the vampire need mouthwash? Because he had bat breath! Some silly vampire jokes to kick off this fun Vampirina Party I styled for Warehouse Party Supplies – you can read my full article over on their site (including links to party supplies and free printables) but I’ll share all the party photos with […] 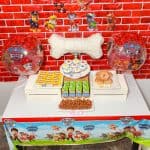 A few years ago, a friend of mine was telling me how much her son loved the show Paw Patrol but I thought she was saying “Papa Troll”. Ha! Yes, I was picturing those fuzzy headed trolls having their own cartoon series on TV. Seriously though, say it aloud to yourself now “Paw Patrol” then […] 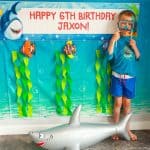 Shark Week is little over a month away so this Shark Party I styled for Birthday In A Box is timed perfectly! Birthday In A Box asked me to use some of their party supplies to come up with the ultimate Shark Party so I tied a few different themes together – sharks, underwater creatures, […] 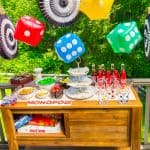 This game night ideas post is courtesy of our contributor Dawn of Revel and Glitter…Remember my last Board Game Night post? It was my inspiration board to creating a fun night with family and friends. Life can get so busy so slow things down and enjoy some quality time. I’m sharing a few easy and […]