This post is courtesy of our contributor Cheryl of Kids On A Plane…Our family recently enjoyed an afternoon at Blue Lagoon Island in Nassau, Bahamas during our Disney cruise. Nassau is one of the most popular ports for cruise lines and the day we docked, there were two other cruise boats lined up beside the Disney Wonder. We were invited to check out the activities at Blue Lagoon Island and were able to spend a relaxing day in Nassau away from the crowds – most of whom were headed to Atlantis. 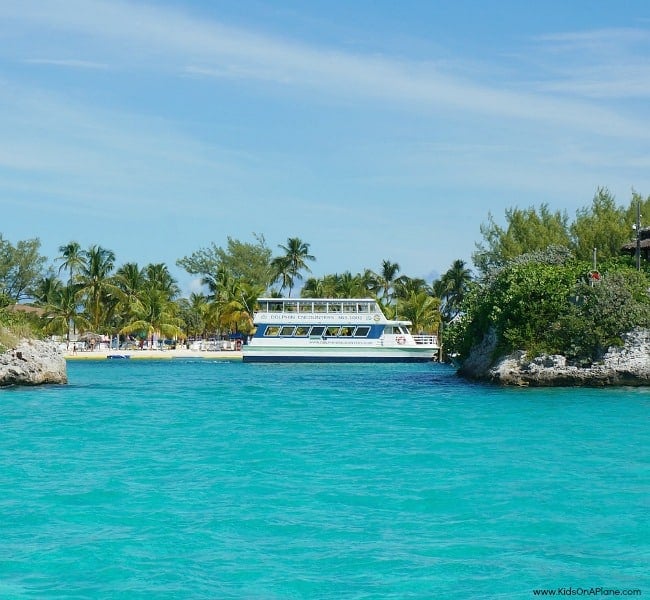 A 30 minute double decker catamaran ride to the private island allowed us to see some famous landmarks in Nassau as well as many stunning waterfront homes. 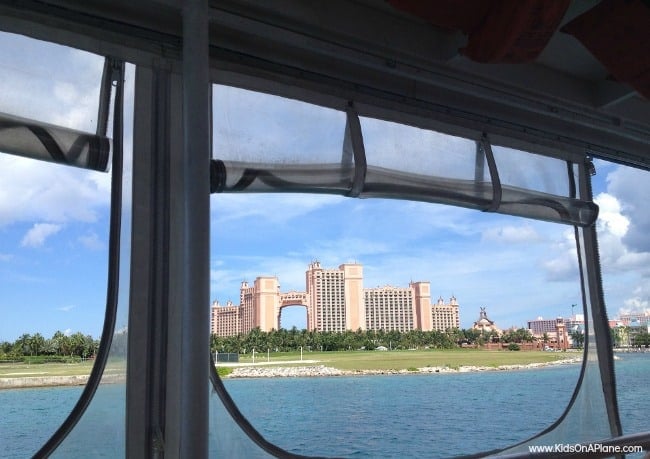 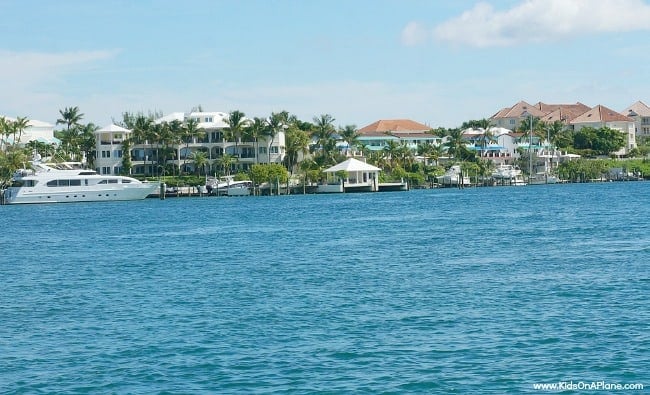 Pulling into Blue Lagoon Island’s boat dock, we were greeted by crystal clear turquoise water (these are original unedited photos – I’ve been to the Caribbean many times in my life as my father’s side of the family is originally from the area and this is something I haven’t seen often!), a water playground with inflatable slides and structures near the beach and calypso music softly playing from the speakers. 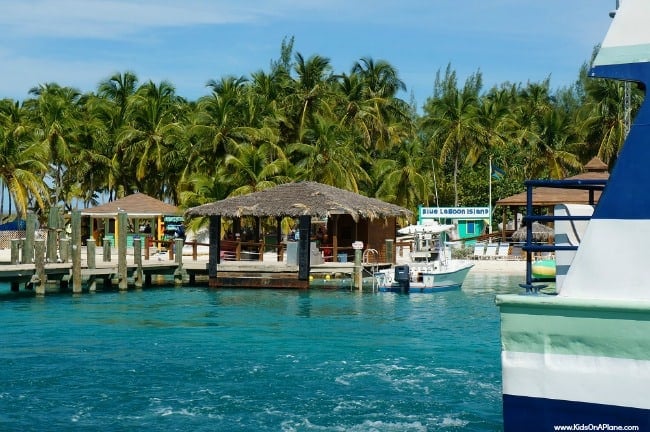 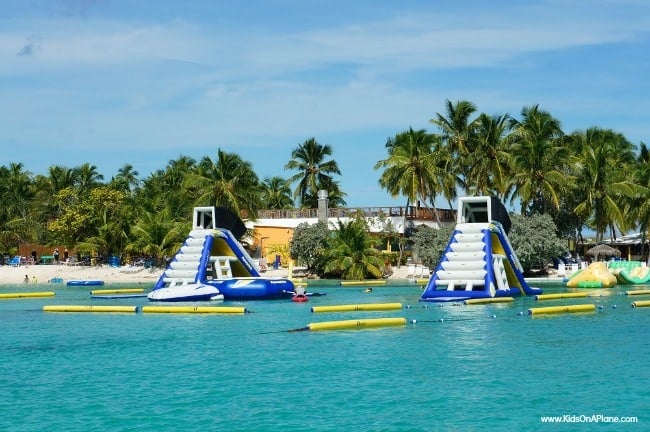 The layout of Blue Lagoon Island is divided into two parts – the animal encounter/swimming area and the beach. 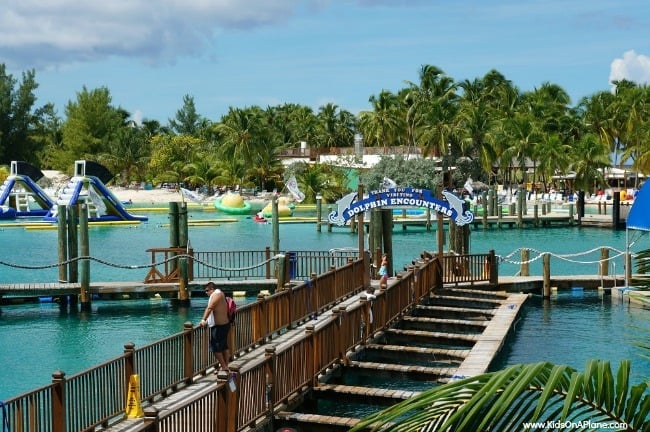 We decided our family of four would participate in Dolphin Encounters before heading to the beach. 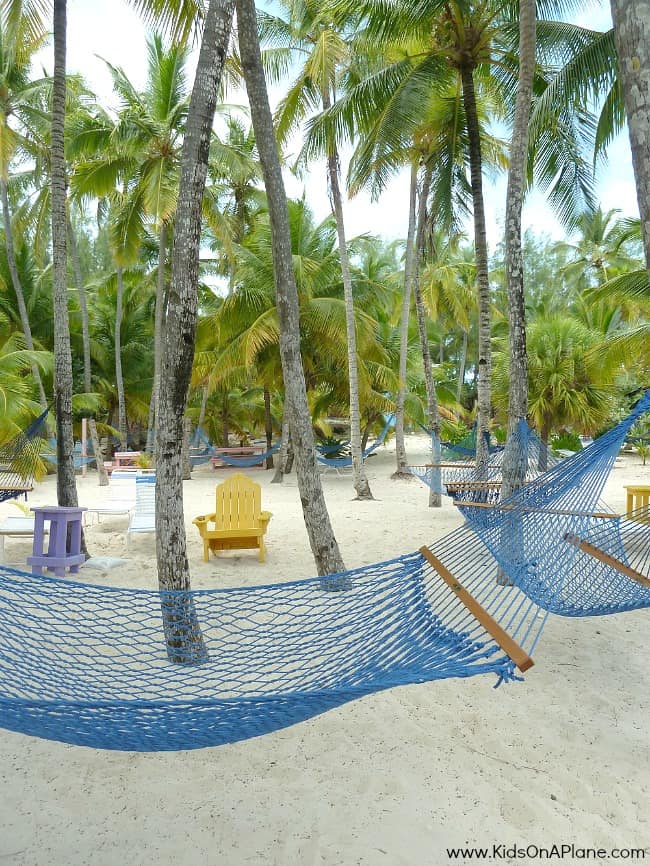 Before we got in the water, we watched a short video on dolphins, what to do in the water during our time with them and what not to do if you see dolphins in the wild. After the video we headed to the pool to meet with our trainer who introduced us to Shawn – a lovable and playful dolphin. 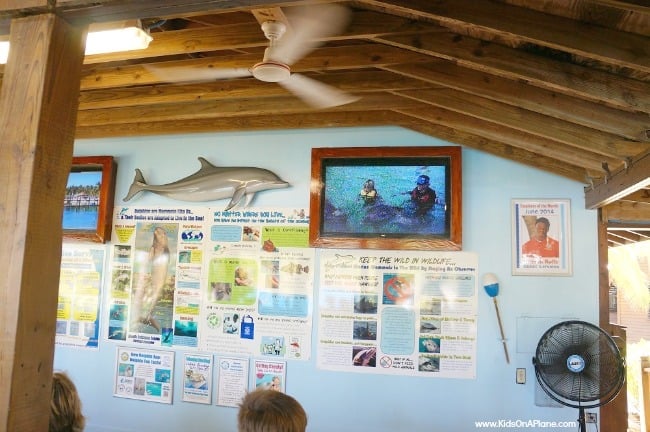 Our group of about 20 something people gathered at one of the pools and in groups of 7 or 8 we walked into the water and stood on a platform while Shawn swam back and forth so we could rub his belly, touch his teeth, and have him splash us with his flipper fins.

Our daughter was a bit nervous at first but quickly warmed up to being near Shawn and was touching his back and kissing him after seeing others “survive” the encounter. Our 3 year old son stayed in Daddy’s arms and just observed Shawn from a distance. He gave him a belly rub and looked into his mouth but didn’t feel the need to get any closer for a hug or a kiss. 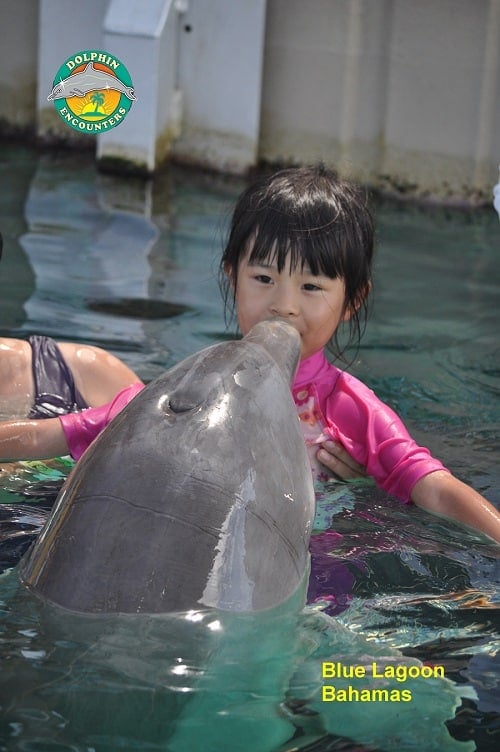 The Dolphin Encounter close to two hours from start to finish and we barely had time to check out the rest of the island. We grabbed some lunch at Bahamas Mama’s and purchased several photos the staff took during our time with Shawn before boarding the ferry heading back to the port.

We had such an amazing experience at blue lagoon island and I’m confident we’ll be back to visit in the next few years – this time with plenty of time to play on the beach.

Our son was so proud of himself for being in the water with a dolphin he couldn’t stop talking about it to the waiters during dinner service. Unfortunately some parts were exaggerated – “Shawn liked me! I gave him a hug! And a handshake!” but I guess it doesn’t matter – he enjoyed himself despite the nail marks he left in my husband’s shoulders. {wink}

Tips for Families Spending the Day at Blue Lagoon Island:

Try to get on the earliest ferry you can so you have enough time to see the animals and play at the beach. Blue Lagoon Island isn’t large by any means but seeing as how some of the programs can take up to two hours, it may leave you with very little time to explore the rest of the place.

Bring a waterproof camera. Blue Lagoon Island is a little piece of paradise in the Bahamas and there’s lots of photo opps around the island. Photo packages are available for those doing the animal encounters/swims but if you know there’s a shot you must have, I would recommend bringing your own to capture those moments yourself instead of relying on staff to take them with their cameras.

Blue Lagoon Island offers several activities including an all day beach pass which includes lunch and the water playground, dolphin encounters, swimming with the dolphins as well as a sea lion encounter. It’s a good way to spend a relaxing day in Nassau if you have limited time there.

There’s a nominal fee for those that want to observe while other family members participate in the dolphin/sea lion encounter or swim. 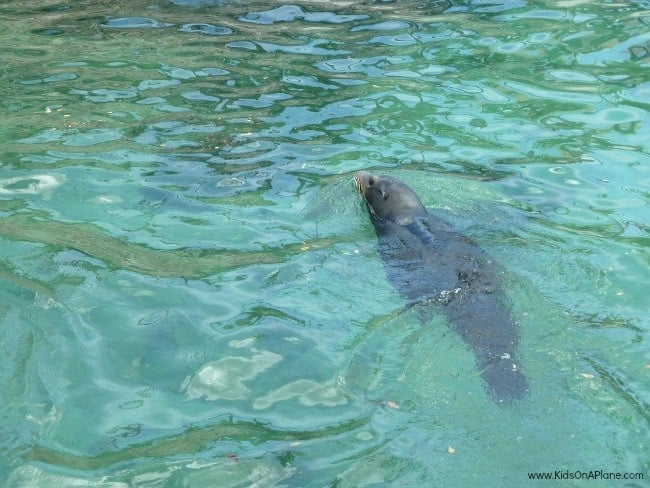 Dolphin programs are an extremely popular activity for cruisers in Nassau and the Blue Lagoon Island offerings are more wallet friendly than the ones at Atlantis (3 and under are free at Blue Lagoon Island whereas at Atlantis, everyone who goes in the water will need to pay for admission). Book as early as you can (either with your cruise ship or directly on Blue Lagoon Island’s website) if spending time with dolphins is on your MUST DO list in Nassau. 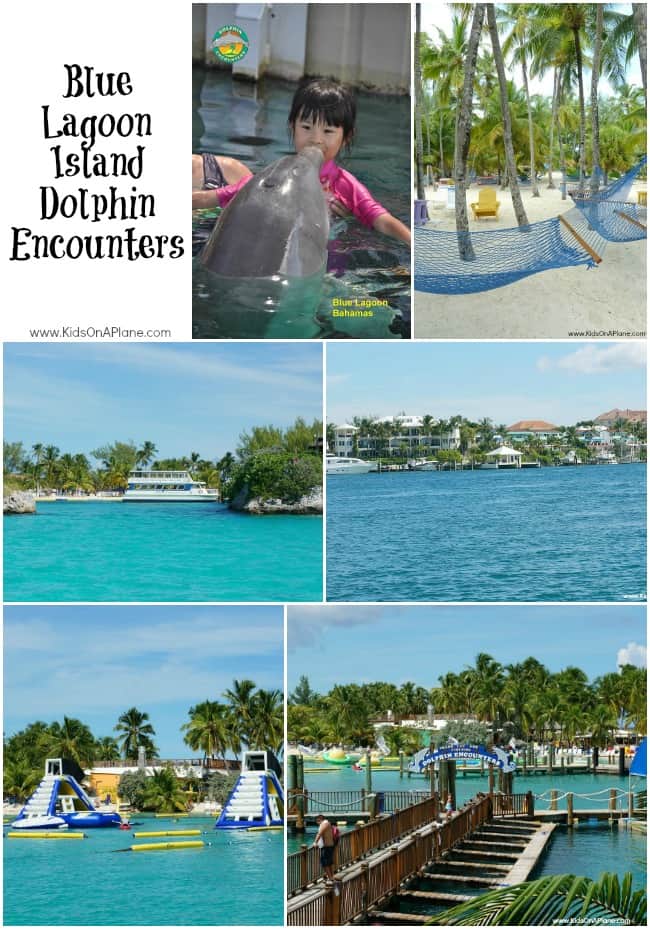 *Thank you to Blue Lagoon Island for hosting my family for the afternoon.

We’d like to send a big THANK YOU to Cheryl for sharing her fun adventures with us! Read more about Cheryl’s travel tips on her blog Kids on A Plane as well as her Facebook page. I love the sneak peeks of her adventures on Instagram!