This Winter Olympics Party post is courtesy of our contributor Chantelle of Dolled Up Design…One of my favorite parties to date has been the Winter Olympics party I planned and hosted for my son’s 4th Birthday. He was born during the 2010 Vancouver Winter Olympics, so it only seemed natural to use it as his birthday party theme when the time came again 4 years later for the Sochi Olympics. 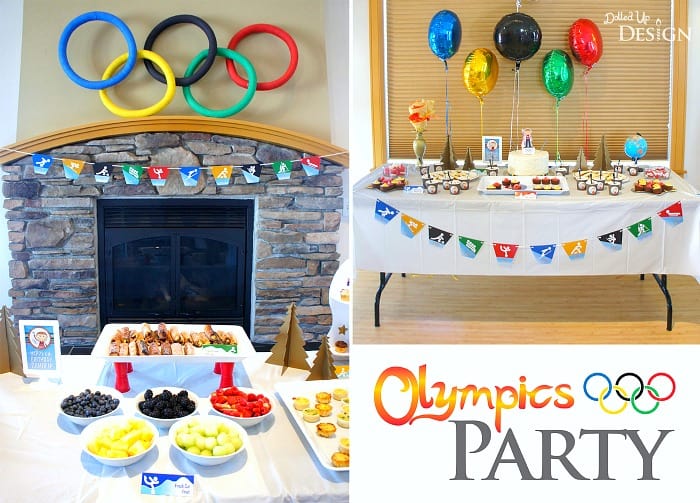 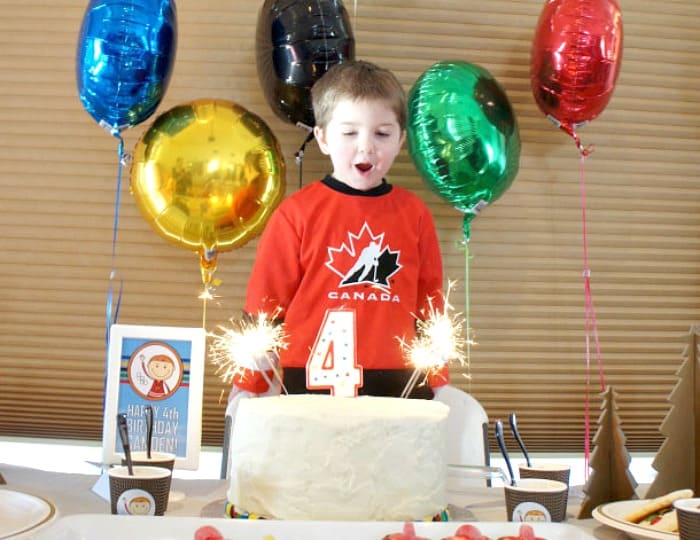 For his 8th, I will not be doing another Olympics themed party, but I thought it would be fun to revisit and share all the fun ideas as the Pyeong 2018 Winter Olympics approach. Winter or Summer, the Olympics is such a great universal theme for all ages!

For the invitations, I designed a simple graphic that looked like my son and drew him on a podium in a wintery setting. I put him in a Team Canada jersey and gave the podium a big number 4 since he was turning four. 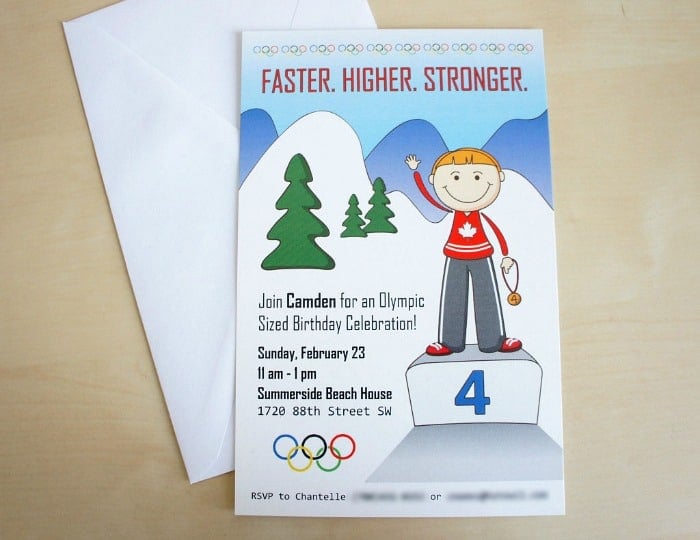 I wanted the party to be bright and colorful, so I centered my decorations around the 5 colors in the Olympic logo. I found some great world flag printed tablecloths and paper plates that fit well with the theme. They looked great layered on the tables with gold star plates and cute gold medals I crafted from chocolate coins and ribbon. 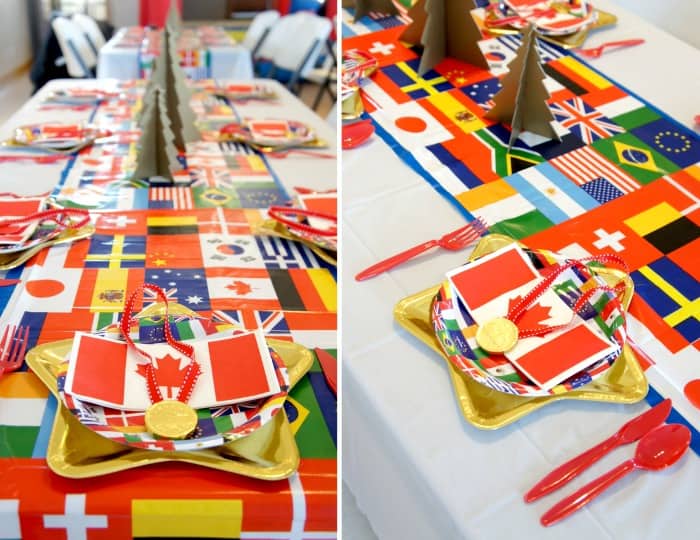 We were in the middle of moving houses during the weekend of the birthday party so we ended up renting a hall with a lovely fireplace. My main centerpiece on the fireplace was a set of Olympic rings I crafted from foam plumbing insulation tubing and some colored paper party streamers. You can find the Olympic Rings Display tutorial over on my blog. 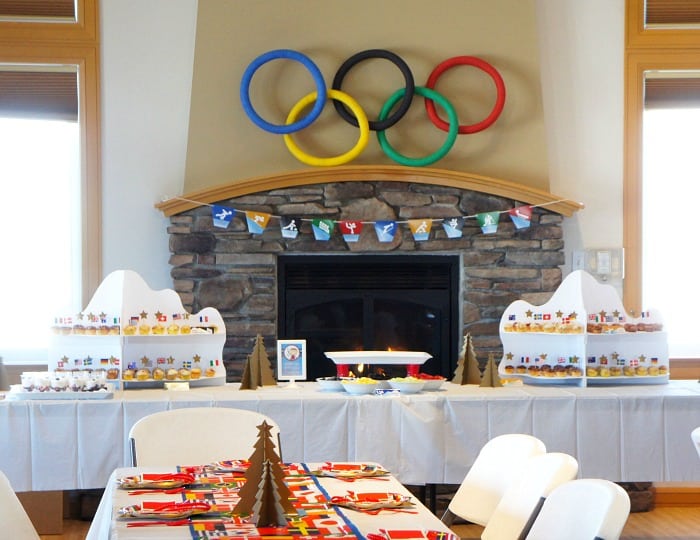 Another quick and easy way to represent the Olympic rings is with round foil balloons. I bought 5 in the different Olympic colors and had them floating at the varying heights behind my sweets table. A DIY banner with the Olympic symbols decorated the front, and I added a plastic globe and DIY torch on the table to further carry out the theme. 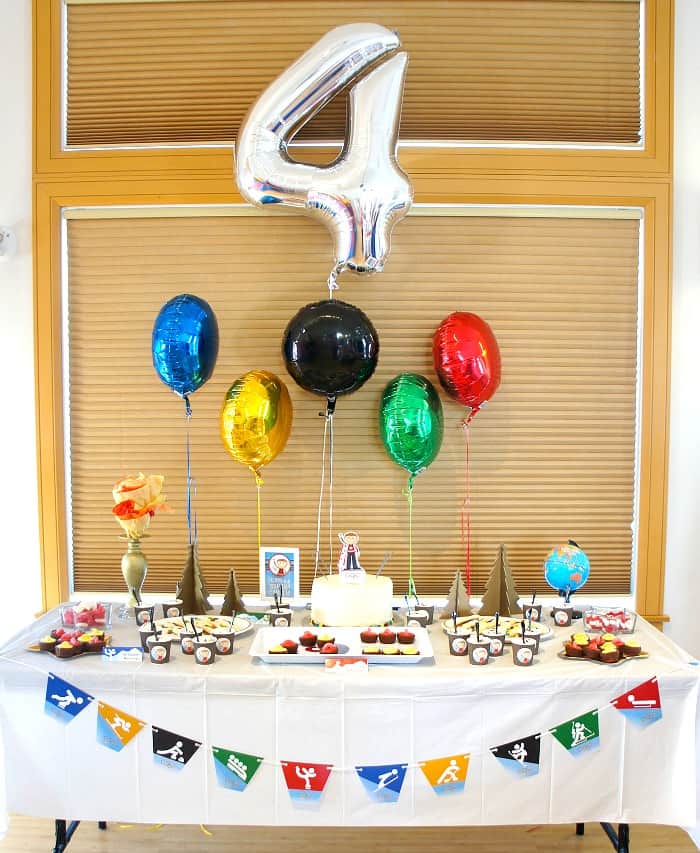 I went with a brunch theme for my Olympics party and served a variety of muffins, fruit and finger foods. The muffins and mini cinnamon buns looked great displayed on white mountains I built out of dollar store foamcore. For an extra touch, I also stuck small world flags and gold stars into them. 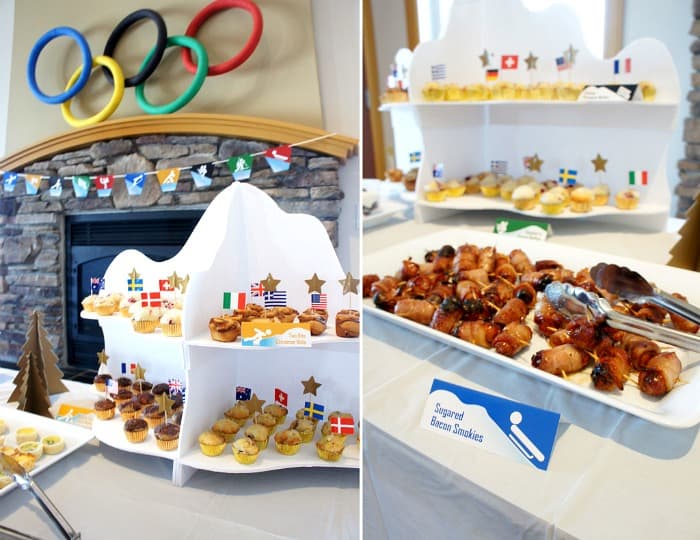 Other foods included French toast roll-ups I made ahead and warmed at the hall, sugared bacon smokies, mini quiche and fruit and yogurt parfaits. Continuing with the Olympic colors, I also had fruit of each color served out of individual white bowls. 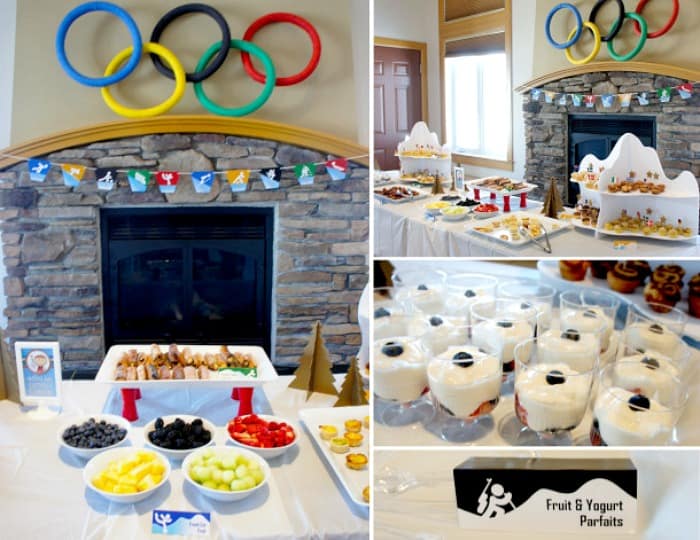 On the sweets table, I used M&M candies pressed into sugar cookies to look like the Olympic rings. One other big hit with the kids was the hot chocolate and whipped cream mousse served out of small paper cups. 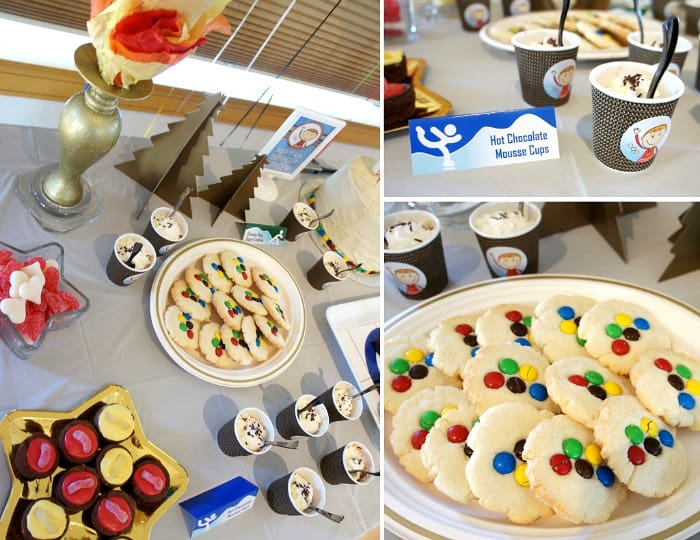 I also gave a container of two bite brownies a quick makeover with a bit of red and yellow colored chocolate wafers and a small piece of candy stuck in for a handle. These curling “rocks” looked great displayed on an image of a curling rink I printed out to fit one of my platters. 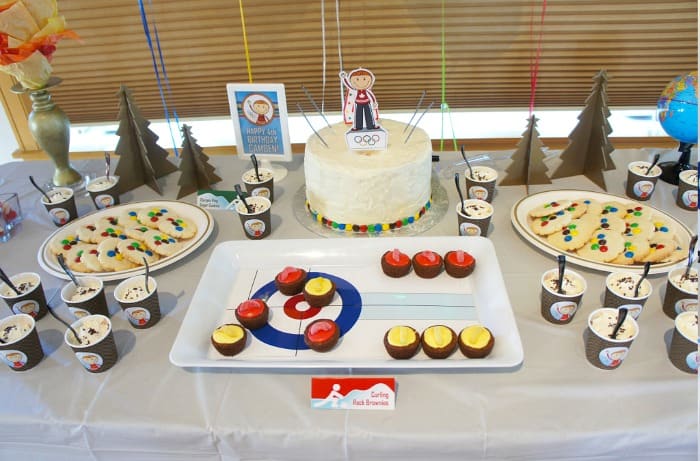 The centerpiece of the sweets table was the birthday cake. With my limited cake decorating experience, I decided to keep the outer design very simple and left the wow factor for the inside layers colored in the same shades as the Olympic rings. For the cake topper, I printed off the same image from the birthday invitation, and finished off the base of the cake with the same M&M candies used on the sugar cookies. 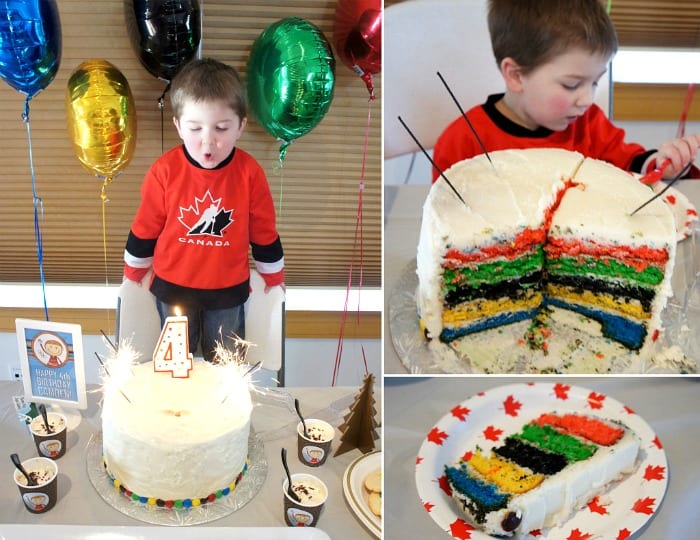 To keep the kids entertained, we set-up my son’s mini hockey nets and had sticks and balls available for a game of hockey. I lucked out finding the sticks and balls on clearance during the summer and grabbed them knowing I would be planning an Olympic themed party. For added fun, we also brought along and set-up our small bouncy castle. 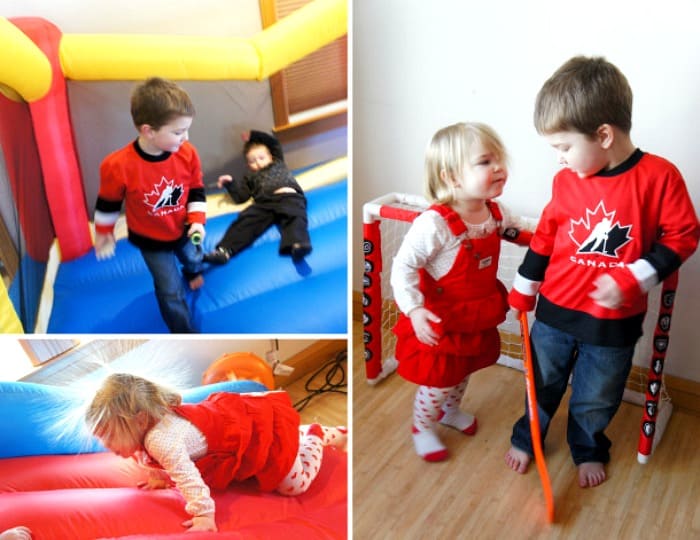 I also wanted some sort of craft, so I came up with an easy activity to decorate their own medals. Metal juice can lids were used as the “medal” and decorated with star shaped foam stickers. For the ribbon/necklace portion, the kids strung colored pasta onto ribbon to create their finished medals. 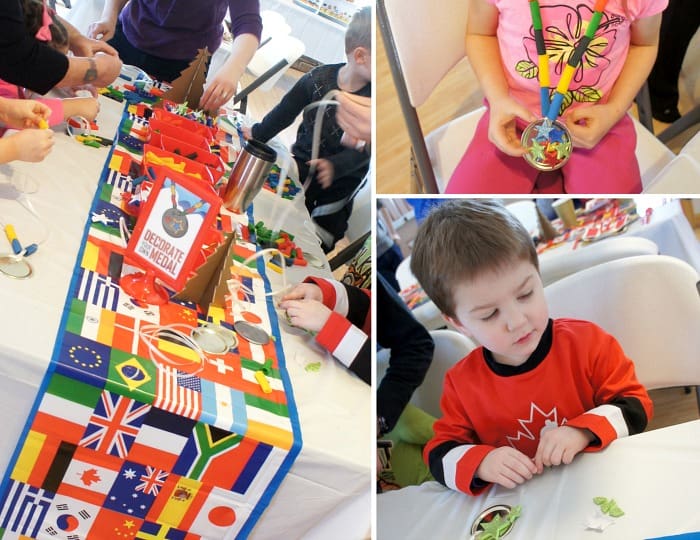 Finally, we played a round of Pin the Rock on the Rings. We are big curling fans in our house so this was a fun Olympic sports themed spin on the traditional Pin the Tail on the Donkey. It was a bit hard to manage with 3 and 4 year olds, but would be a great party game for slightly older kids. 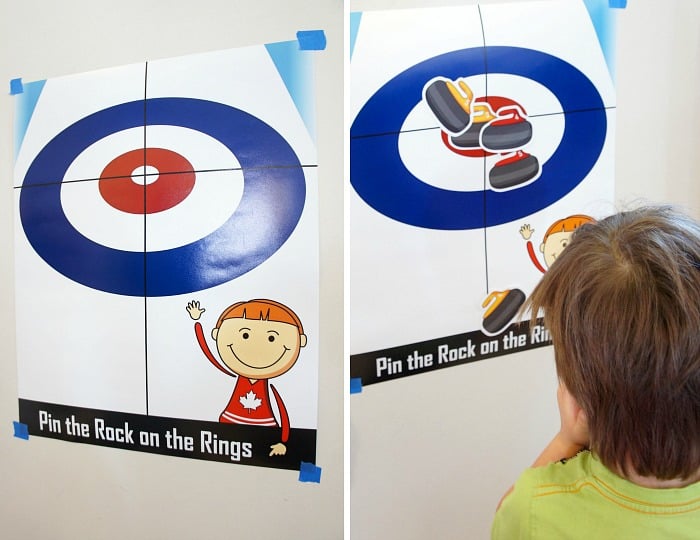 The mini hockey sticks and balls the kids played with during the party served double duty as party favors. The kids each got to pick out their favorite color stick to bring home, alongside a treat bag containing a tiny Zamboni (from McDonalds) and a small bag of hockey themed gummies with a matching treat-topper. 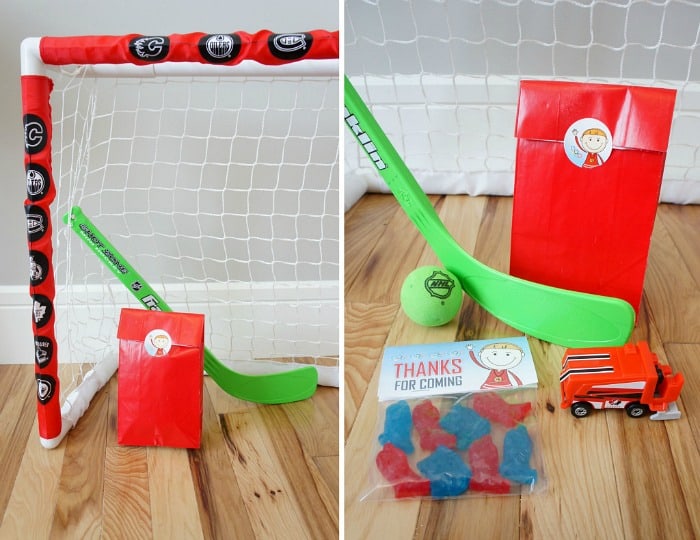 I loved this party and hope it has given you some ideas for posting your own Olympic themed party. With or without all the fun treats and decorations, I am stll definitely looking forward to watching and cheering on Team Canada in the upcoming Pyeong 2018 Olympics! 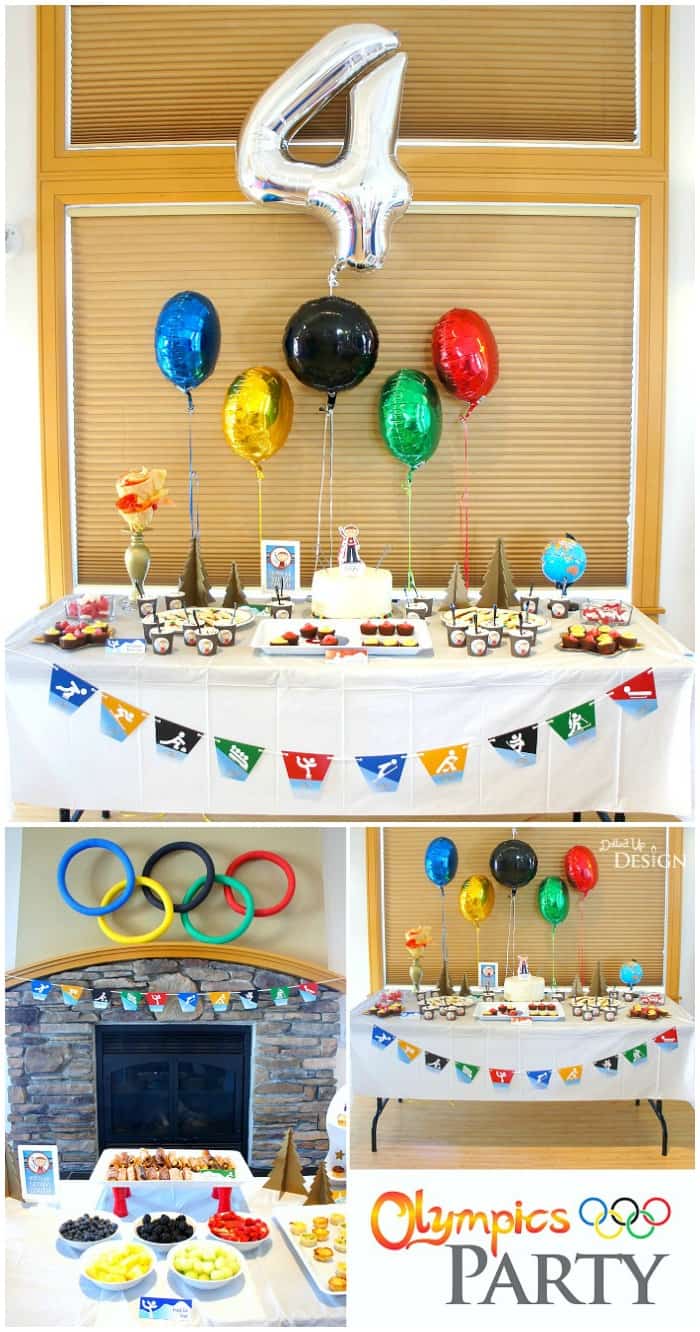 We’d like to send a big THANK YOU to Chantelle for sharing these creative party ideas with us! Her parties & crafts are always easy to recreate and kids love them! Be sure to follow her on Facebook to stay updated on all her fabulous ideas.