Father’s Day is quickly approaching and Disney Junior Canada has a lot planned for us! A Finding Nemo Twitter party, the debut of Finding Nemo on Disney Junior Canada, special episodes featuring your favourite male role models and a chance to win a prize valued at $33,000. What?! You read that right – a $33,000 prize! Keep reading to find out how you can win!

To celebrate Father’s Day, Disney Junior Canada has planned a special movie showcasing the bond between a father & son – Finding Nemo! My family has not yet watched this movie so we’re pretty excited for the commercial-free premiere on Saturday, June 15th at 6pm ET.

Nemo is an adorable little clownfish who gets scooped up by a diver. Nemo’s father (Marlin) and Dorey (voiced by the incredibly funny Ellen DeGeneres) set off on an adventure to find Nemo.

Interesting Fact: Did you know that the sea anemone protects the clownfish from predators and the clownfish defends the anemone from its predators? It kind of sounds like they are BFF’s of the sea!

For a fun Finding Nemo party food, I was trying to create a sea anemone out of an onion blossom. I thought the deep fried onion blossom resembled a sea anemone and would be an adorable addition to a Finding Nemo party. I first tried to create a healthier version of an onion blossom by ditching the deep fryer and using olive oil and balsamic vinegar instead. I’ll spare you the pictures, but it when it came out of the oven it looked like a sea of floating onion chunks. I moved onto Plan B – purchase a deep fried onion blossom from a restaurant! Although it isn’t the healthiest snack food, you can surround it with healthier options like starfish (cheese cut into star shapes), coral (carrot sticks), and seaweed wraps (green tortillas topped with sandwich meat, then rolled and sliced into bite-sized pieces). 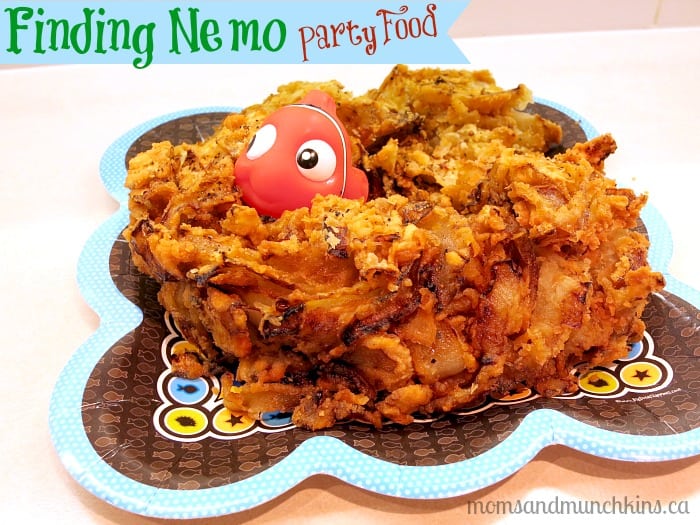 Do you follow Disney Junior Canada on Twitter? If you don’t already, you’re going to want to start today! They will soon be announcing a fun Finding Nemo Twitter Party and you’re not going to want to miss out on this one!

On Sunday, June 16th, Disney Junior Canada will be airing special shows featuring male role models from some of your favourite shows. These will be playing throughout the day so be sure to tune in! Perhaps you can even make Dad some mustache-shaped pancakes to enjoy while watching a bit of TV.

Don’t forget to visit our Father’s Day page for even more fun ideas.

Disclosure:  I’m part of the Disney Junior Mom program and I receive special perks as part of my affiliation with this group. The opinions on this blog are my own.