So many little girls dream of meeting their Prince Charming but I was a little different – I dreamed of meeting a handsome fox. Not just any fox – Disney’s Robin Hood! This brave fox was a hero in disguise stealing from the rich (or as he likes to call it…borrowing) to give to the poor. How could you not love this fox with his accent & his desire to help the less fortunate! For those of you who remember the movie from your childhood, can you believe that the movie is celebrating its 40th anniversary this year? It’s true! To celebrate, Disney proudly presents this classic movie on Blu-Ray for the first time ever. The release date is August 6th, 2013. 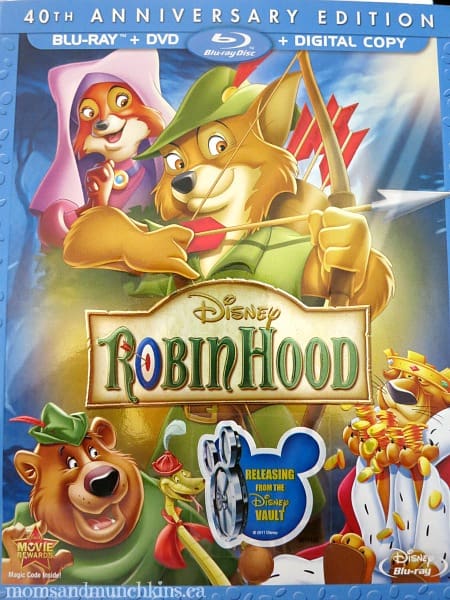 Robin Hood is a clever fox who uses plenty of tricks and costumes in his schemes to rob from the rich to give to the poor. He and his companion Little John are always on an adventure to help those in need in Nottingham.

While King Richard is off on a crusade, the greedy Prince John takes over the throne and has his assistant (Sir Hiss) and the Sheriff of Nottingham close by his side to help him take money from the poor townsfolk.

Meanwhile at the castle, Maid Marian dreams of her long lost love (Robin Hood) and wonders if he ever thinks of her too. Back in Sherwood Forest, Robin Hood also dreams of the love of his life but thinks that it will never work between them. The love story between Robin Hood and Maid Marian has always been my favorite part of the movie. Watching them walk through the forest together with all the fireflies around has always been my favorite part. That’s when I knew that one day I’d like to find a brave fox of my own!

This clip is a of a celebration that the people of Nottingham held with Robin Hood and Maid Marian after they outfoxed greedy Prince John. This wasn’t the end of their adventure though – Prince John wasn’t going to step down from the throne without a fight.

My husband, son and I watched the movie tonight along with our own medieval feast – basically anything you can pick up and eat with your fingers. Do they look like they’re enjoying their feast and the movie?

Disney’s Robin Hood will be released from the Disney Vault and available on Blu-Ray and DVD combo packs on August 6, 2013.

*Disclosure: I received a copy of the movie in exchange for an honest review. All opinions expressed here are my own.