I love easy crafts that are designed for kids. I enjoy making crafts but I often lack the patience it takes to make the big & beautiful projects. I end up with glue in my hair and a lot of laughter as I look at my end results in comparison to the beautiful tutorial I pinned in Pinterest. This Christmas Jar Craft is perfect for kids and those that struggle with crafts like I do. These Christmas jars can use used to hold little treats, as a cup to hold your milk or even as a little container to hold small Christmas craft supplies. 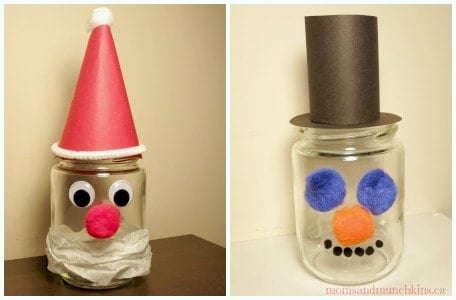 You can use jars of any size for this craft. I used double-sided tape instead of glue but if you want a more permanent craft you can bring out your kid-friendly glue. I used double-sided tape because I thought it would be fun to have a little “Christmas jar craft” bag that your kids can use over and over again to dress up their glasses or jars for milk. This way you can still wash them without ruining your little project. It’s also a great way to occupy the kids for a few minutes while you put the final touches on supper!

For the Santa jar, I simply created a red cone hat with red paper and tucked a white pom pom in the top. I used a white pipe cleaner tied around the base of the hat for the trim. Two googly eyes and a red pom pom were placed on with double-sided tape and I crumpled up white tissue paper to tie around the base for his beard.

For the Snowman jar, I traced a circle a little larger than the rim of the jar for the base of the hat. I then used black paper to make a cylinder for the hat. I left the top of the hat open. Two blue pom pom eyes and one orange pom pom nose were placed on with double-sided tape. A small strip of double-sided tape was placed underneath to hold small black pom poms to look like a snowman’s smile made of coal.

Super simple, right? The great thing about using double-sided tape is that you can easily take all of the supplies off after you are done with the jar, place them in a bag and use them again the next time your kids want to make a cute jar to drink their milk out of.